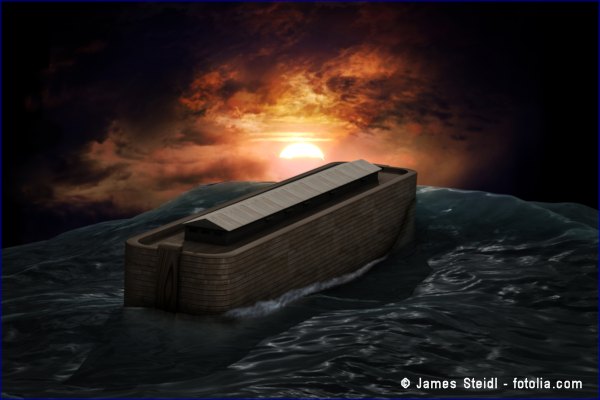 This is like the days of Noah to me: as I swore that the waters of Noah should no more go over the earth, so I have sworn that I will not be angry with you, and will not rebuke you. (Isaiah 54:9)

This week’s Haftarah (extra reading portion from the Prophets) was obviously chosen long ago because it included a reference to a key event in its associated Torah portion. The story of Noah and the flood is one of the greatest tragedies recorded in Scripture. The world had become so evil that “the LORD regretted that he had made man on the earth, and it grieved him to his heart” (Bereshit/Genesis 6:6). The word translated “regretted” is actually based from the same root word, “naham,” from which Noah’s name is derived. In some contexts, it can also mean “to comfort,” which appears to have been his father’s intention when he named him (see Bereshit/Genesis 5:29). This breadth of meaning encompasses the great irony of it all. God’s grief over extreme moral decay led to an extreme solution through Noah.

If in reference to times in which we live, I said, “this is like the days of Noah,” you may assume that I was making a statement about current moral decline. You might think that I was implying that we are on the brink of judgment, something similar to the devastating flood that wiped out all land and air creatures, except for Noah, his family and the animals on the ark. While that’s a reasonable conclusion, that’s not what God is saying through Isaiah in the quote I read at the beginning. Stating “this is like the days of Noah” in this context is not about the threat of judgement at all. On the contrary, it is a statement reaffirming God’s commitment to protect his people from such threats.

Soon after the flood, once the ground was sufficiently dry and Noah, his family, and the animals were able to leave the ark, God promised to never again destroy the world by a flood (see Bereshit/Genesis 9:11-17). The rainbow was to forever serve as a sign of God’s commitment to us. So many centuries later this is still the case. While flooding still poses a threat in the world, we needn’t fear the possibility of a flood of the magnitude of Noah’s day again. While that is good news for everyone everywhere, think what it must have meant to Noah’s generation. Talk about Post-traumatic stress disorder! While grateful for being preserved, what a horrific experience it must have been to witness the drowning of so many, and then to have to endure a whole year in a dark, cramped, smelly enclosed box, not to mention bobbing on the water for much of that time. Every drop of rain after that would have brought back extreme nightmarish memories. But every time the rainbow appeared the people would be reminded of God’s faithfulness.

This makes me wonder if the story of Noah’s ark isn’t more about not fearing dangerous threats than about the judgement that befell the world through the flood. It’s probably both, but I don’t think we spend enough time focused on God’s commitment to preserve his people.

But what are the days that are “like the days of Noah” spoken by Isaiah? Is this a general statement to the people of Israel to not fear hard times whenever they may occur? That’s a good principle to live by, but that’s not what’s going on here. God through his prophet is referring to another time, a time in the future that will be “like the days of Noah.” Through many of the Hebrew prophets we learn of such a day, when the threat of judgment will be no more. A day when Israel’s relationship with God will not only be restored but permanently established, never to be broken again. Due to the New Covenant as established by the Messiah, sin will be forgiven, the Torah (God’s teaching) will be internalized, and Israel will be God’s people forever (see Jeremiah 31:31-33). “Like the days of Noah,” but only more so, there will be nothing to fear ever again.

Until then, we can have a foretaste of that kind of security in God now. By putting our trust in Yeshua the Messiah’s death and resurrection, we, like Noah and his family, will be preserved in the midst of horrific circumstances. And even while the storms of life wage on, we needn’t be traumatized. Just as God has preserved us until now, he will continue to do so forever.