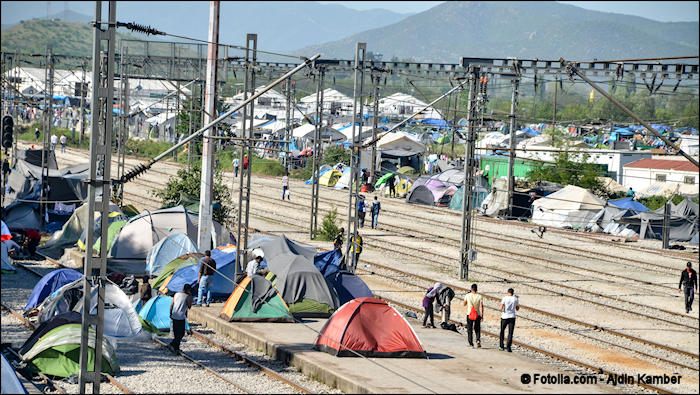 Migrants and refugees camping at the Greek-Macedonian border, April 15, 2016

But the LORD said to Moses, “Do not fear him, for I have given him into your hand, and all his people, and his land. And you shall do to him as you did to Sihon king of the Amorites, who lived at Heshbon.” (B’midbar/Numbers 21:34)

This week’s parsha (Torah reading portion) includes two key incidences in the history of ancient Israel. The people are nearing the end of their wilderness wanderings. Moses will die soon, and his leadership will pass on to his protégé, Joshua. In contrast to thirty-eight years earlier, the people will enter and conquer the promised land. In God’s providence he provided these events to more than prepare them for success in the future. They would also serve as reference points when facing greater challenges ahead (see D’varim/Deuteronomy 31:4; Tehillim/Psalms 136:17-22).

There was no explicit plan to inhabit the lands to the east of the Jordan River. At this stage in their journey Israel was simply continuing their travels. To get the right picture, remember that Israel numbered around two million. This was no family hiking vacation. That the residents of the region would have concerns about this foreign presence is reasonable. And so was Israel’s request for safe passage. It wasn’t until Israel was mortally threatened that battles ensued; battles they won, resulting in their permanently displacing the prior inhabitants.

These preliminary limited conquests function as prototypes for the far more comprehensive dispossession of the peoples of the land to the west of the Jordan. Few items in the Bible are viewed with as much disdain as these today. How could a good and loving God not only tolerate but encourage population dispossession and in some cases genocide? I sympathize with the various theological and philosophical gymnastics used to overcome the stigma of associating with such distasteful behavior. Yet attempting to distance God or ourselves from these events, while perhaps making God and the Bible more appealing, results in misrepresenting Scripture.

Similar disdain is expressed by many today in the Western world for our being products of European colonialization’s displacement of indigenous peoples. I see this as a psychological condition akin to survivor’s guilt. Survivor’s guilt is when a survivor of a tragedy has trouble coping with their continued existence while others who went through the same tragedy didn’t make it. They feel bad for surviving even though they may not have had anything to with it and certainly can’t reverse history. Similarly, what I am calling “displacement guilt,” is also due to tragedy experienced by others. Yet instead of being survivors of that tragedy, we are descendants of the perpetrators. As with survivor’s guilt, we can’t change the past.

Don’t get me wrong. Past injustices can and should be addressed, especially when the effects of the past are still controlling the present. However, we are not talking about righteous indignation, which channels itself into practical expressions of justice. Instead, displacement guilt rages uncontrollably over the past, harboring bitterness and resentment as we unsympathetically judge our own forebears. Thinking our harsh critique of the past should free us from inheriting responsibility, we nonetheless are burdened by guilt, since we continue to benefit – even enjoy – a lifestyle that deep down we believe was wrongly built on the backs of others.

Every one of us is the product of the events of history, including the brutal, at times unjust, and usually complex displacement of peoples. In the case of Israel, we know from Scripture that people such as the Amorites were displaced because they were extremely wicked (see Bereshit/Genesis 15:16). If it wasn’t for this particular displacement, then the world would be a lot worse than it is. God’s installation and development of Israel in the place of the Amorites and other wicked people groups at that time laid the foundation for much of the goodness that would one day be extended to the nations through the gospel.

Similar to Israel’s past, the current world configuration is largely the result of all sorts of conflict and strife. It’s too easy to sit in the present, pointing fingers at the past. Thinking we would have done differently from our forebears is proof of how extremely blind we have become to the reality of human nature. Life’s circumstances have changed; people have not.

As survivors of history we would do well to be students of history. If we don’t understand where we have come from, we won’t understand how we got here or understand where we are going. If anything, the Bible is painfully honest. It reminds us that history is full of brutality and conflict and that even the best of human endeavors have often resulted in disaster. But if you are reading this, then you are still here, and you can make a positive difference. To do that requires hope in God’s future, not bitterness towards the past.