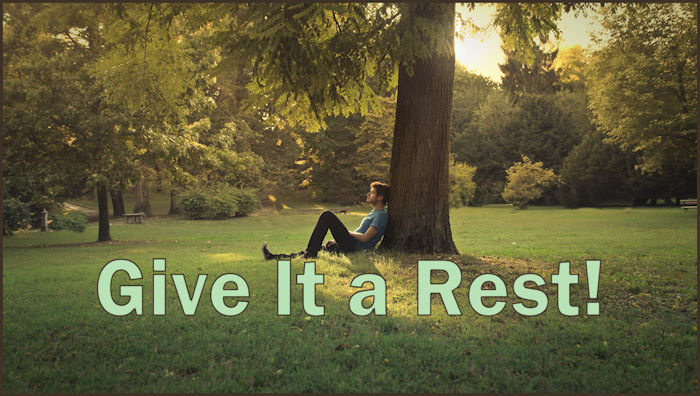 Speak to the people of Israel and say to them, When you come into the land that I give you, the land shall keep a Sabbath to the LORD. (Vayikra/Leviticus 25:2)

Everyone who believes that the entire Bible is God’s inspired and authoritative written Word faces the challenge of working out how to apply it to our lives today. It’s not as if the Scriptures are simply a collection of general spiritual sayings or a compilation of moral tales. While it includes such content, the Bible is much more than that. Almost all of Scripture was originally intended for a particular people at a particular time. From its stories, laws, prophetic utterances, and letters, and so on, we seek to deduce truths about God and life in an effort to determine how those truths apply today.

In both Jewish and Christian communities there is much controversy in particular over the section of Scripture called the Torah, the five books of Moses. Orthodox Jews claim to fully observe it but do so through the filter of rabbinic tradition. That includes making up for the impossibility of fulfilling key commands – including the offering of sacrifice – due to the destruction of the Temple in Jerusalem about two thousand years ago. Non-orthodox Jews tend to see Torah as ever evolving as they accommodate it to changing times. Christians, on the other hand, have tended to relate to Torah in one of two ways. Some claim that it has been rendered obsolete by the New Covenant, having been superseded by the teachings of Yeshua and his followers. Others insist it continues to be binding except for its ceremonial aspects, which have found their completion in the Messiah.

It seems to me that the root of the confusion has more to do with what Torah really is, both then and now. Contrary to much Jewish and Christian thought, the Torah and the Sinai covenant given through Moses are not one and the same even though the Sinai covenant is often called, “Torah.” The Sinai covenant was designed as the constitution for the nation of Israel. With the giving of the New Covenant through Yeshua (see Jeremiah 31:31-33; compare Luke 22:20) and the destruction of the Temple, the Sinai covenant was rendered obsolete along with the particular elements given to maintain it, such as the sacrifices.

But there was more to the Sinai covenant than its constitutional function. God used the giving of this covenant to reveal, first to Israel and then to the whole world, his ways regarding every aspect of life, including business, sexuality, justice, and so on. The establishment of the New Covenant in no way abolishes God’s eternal ways or his “Torah.” In fact under the New Covenant, Torah is internalized. For God says through Jeremiah: “I will put my Torah (English: law) within them, and I will write it on their hearts.” Discerning what of Torah was temporary, being limited to the Sinai Covenant, and what is ongoing until now is not always an easy task, but well worth the effort.

Sadly however, it seems that we often regard God’s directives as oppressive restrictions that get in the way of things we want to do. It’s too bad we are slow to see that our reluctance to embrace God’s will is due to the forces of evil that continue to get the upper hand in our lives. God’s ways as revealed throughout the whole Bible, and understood correctly, are always life giving. Take Sabbath laws for example. Under the New Covenant, it is clear that Sabbath laws were not to be imposed upon non-Jewish believers (see Galatians 4:10; compare Acts 15:19-20). But does that mean all believers must disregard God’s weekly rhythm and embrace the 365-day/year, 7-day/week, 24-hour/day lifestyle so prevalent today? It’s not that long ago that countries with strong biblical roots took weekly days off – real days off – when most businesses were closed and a majority of people attended worship services, taking time to rest and be with family. Perhaps we would do well to consider Sabbath again.

Or take the Sabbatical year as mentioned in the verse I quoted at the beginning. Covenantally, like the weekly Sabbath, we have no justification to enforce such a custom, but should that stop us from considering its possible benefits? Is the Sabbatical year strictly a ritual for the sake of the Sinai covenant only, or are there benefits in allowing farmland to take a rest one year in seven?

The sabbatical year is but one of many reminders in Torah that in our responsibility to be stewards of the planet (see Bereshit/Genesis 1:26) we must avoid exploiting our resources. It is so tempting to try to extract as much as we can for ourselves in the moment. But if we do that, we will create a disastrous situation for future generations that could have easily been avoided. God, who himself rested on the seventh day and was refreshed (see Shemot/Exodus 31:17), designed his creation to require rest as well. Whether it’s you personally or your sphere of work, maybe it’s about time you gave it a rest.