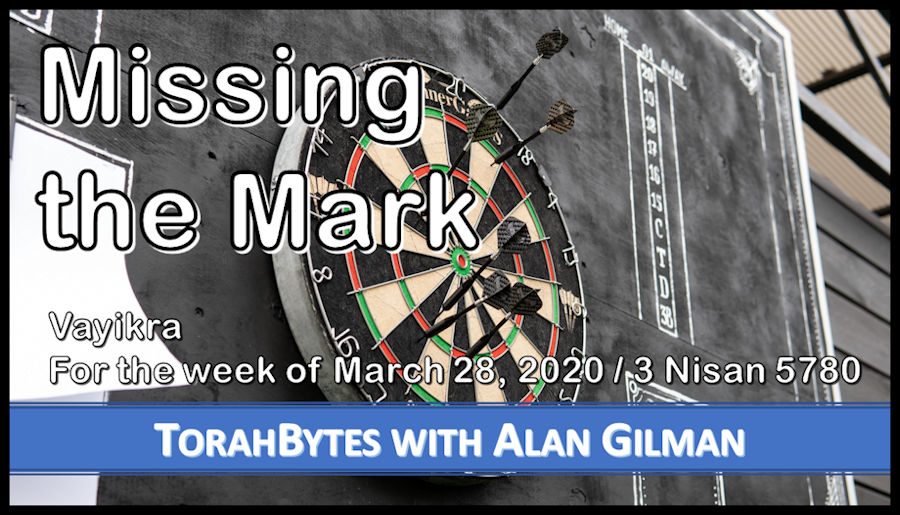 The Bible seems to be obsessed with a concept, which in English is called “sin.” There are several words referring to wrongs of various kinds, but the most common is the Hebrew cha-ta’, whose root appears almost six hundred times in the Hebrew Scriptures. Many of those times have to do with offerings for sin, not sin itself. Either way, it’s a core biblical concept. No wonder Solomon writes: “Who can say, ‘I have made my heart pure; I am clean from my sin’?” (Mishlei/Proverbs 20:9); or Paul, in the New Covenant Writings: “For all have sinned and fall short of the glory of God” (Romans 3:23).

We don’t hear the concept of sin referenced in our society. I assume that a lot of biblically minded people would suppose the reason for that is that people deny its existence similar to the denial of God, especially the biblical God. That might have something to do with it, but I think it has more to do with the tendency for believers to over-spiritualization biblical concepts, not the concepts themselves. The meaning of cha-ta’ is “missing the mark.” While people in general often talk as if there is no objective standard of right and wrong, believers and non-believers alike acknowledge our inability to be what we think we should be. Every time someone perceives that they or someone else fails, they are missing the mark or in other words, sinning. While some of the standards we impose on self and others may be truly unreasonable, most of us, believers and non-believers, agree that we are all sub-standard in some way.

We tend to refer to failure as mistakes, such as incorrect answers on a test. Yet, by calling them mistakes, we tend to lessen their seriousness. Is killing someone as a result of driving drunk a mistake? Is marital infidelity a mistake? These are all fails, examples of different ways we miss the mark. In this week’s parsha (weekly Torah reading portion), we read some of how the ancient community of Israel was to deal with sin. Various kinds of sacrifices were to be offered as a way of dealing with missing the mark. Having to go through such rituals, the fact of human imperfection was instilled upon everyone’s psyche. Awareness of sin alone didn’t automatically free the people from its influence and consequences; but it did create the opportunity to experience freedom through forgiveness in relation to both God and the community. The honest acceptance of the truth about self, provides the opportunity to draw close to the Master of the Universe and find the freedom that comes from forgiveness. For that to occur however, a person had to take responsibility for their failure. Ignorance, denial, or refusal to acknowledge one’s failures results in remaining under the control of sin.

As the world takes drastic measures to cope with the COVID-19 novel coronavirus, it is tempting to look for who to blame instead of acknowledging that the threat of deadly sickness is yet another dramatic expression of the imperfections of the human race. This is not to say that this disease is due to sin as if it is directly related to something you or I may have done wrong. Rather, it is a reminder that we humans are not what we are meant to be. We fall short of God’s glory.

God has provided what we need to more than cope with this threat through the death and resurrection of the Messiah. How to connect with that must start with each of us acknowledging the ways we miss the mark. There is no better time than this to take self-inventory and admit our failures. Let’s humble ourselves before God, admit our wrongs, make amends with others, and receive the freedom of forgiveness that Yeshua offers.