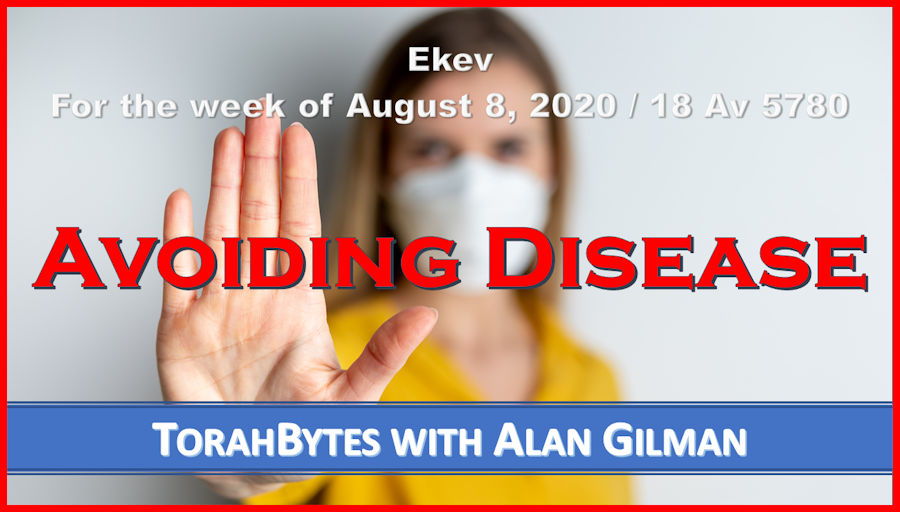 And the LORD will take away from you all sickness, and none of the evil diseases of Egypt, which you knew, will he inflict on you, but he will lay them on all who hate you. (D’varim/Deuteronomy 7:15)

We live in a health-obsessed age. This is one explanation for the high amount of compliance to government-mandated regulations with regard to the current pandemic. Even among detractors, the basis of their push back is often health concerns, be they physical or mental. Sure, there are other concerns such as the economy or fear of conspiratorial forces, but by and large concern for health is a dominant factor. I know that not everyone is a health fanatic, but I don’t think the world has ever seen this level of health consciousness. From diet to exercise to the multiplicity of conventional and alternate therapies, getting well and staying that way is a societal obsession.

The God of the Bible is health conscious too. He wanted Israel to have good health. It was to be one of the benefits of staying true to the covenant that he gave them through Moses. Questions arise when reading a verse like the one I quote above, such as, does the Torah provide us with a sure-fire health program, that if carefully followed, we are guaranteed to be free from any and all sickness? Given the full breadth of Scripture, it is safer to conclude that God is speaking in general terms. By adhering to God’s directives, Israel would experience substantial community health.

In the verse I quoted, there is a specific reference to “the evil diseases of Egypt.” These are not the Ten Plagues that led to Israel’s release from slavery, but terrible illnesses the Israelites themselves had experienced while living there. Faithfulness to Israel’s covenant obligations would safeguard them from such afflictions, while those who hated Israel would remain vulnerable. This may sound as if God would reward the behavior of Israel with health and judge their enemies with sickness disconnected from natural benefits and consequences of their respective lifestyles.

Biblically speaking, there is no need to separate God’s involvement in human affairs from the natural realm. The natural and so-called supernatural are far more integrated than many may think. I say “so-called” supernatural because we often think of God’s involvement as completely separate from the natural realm. These realms are better thought of in terms of the material and spiritual aspects of the one creation. God’s activity shouldn’t be viewed as an occasional invasion into our realm. Rather he is ever present, always working, and accessible to us. I accept that some of what is going on with “the diseases of Egypt” is the result of God’s direct activity among faithful Israel and their enemies, but that is part and parcel of and not separate from natural benefits and consequences.

Through Moses God provided Israel with a healthy lifestyle. Torah’s ritual cleanliness and sexual guidelines, for example, protected his people from all sorts of diseases. But how would Israel’s faithfulness to God’s healthy Torah guidelines result in their enemies being afflicted with the “diseases of Egypt?” Note that these diseases would afflict those who hated Israel. I imagine the disdain for God’s covenant people would result in the curse that was an element of God’s promise to Abraham in Bereshit/Genesis 12:3, which reads: “him who dishonors you I will curse.” But that doesn’t mean there’s no practical dynamic at play. To hate means to show no regard for. To hate Israel would result in an attitude of disdain for not only the nation in general but for their unique customs. Israel’s customs were not simply the result of evolutional cultural development, but ways of living revealed to them by the Creator himself. To disdain Israel’s God-given customs invited disease.

What was true in Moses’ day is still true today. Despite obsession over health, we will continue to be overwhelmed by all sorts of ancient and novel sicknesses unless we turn back to God and his word.