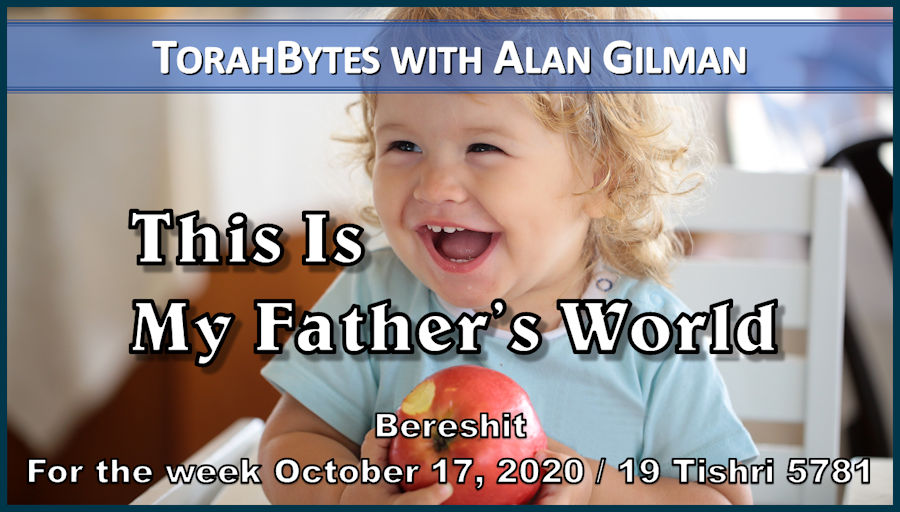 And God saw everything that he had made, and behold, it was very good. And there was evening and there was morning, the sixth day. (Bereshit/Genesis 1:31)

Many years ago, I was working as an instructor at a business college in Vancouver, British Columbia. As far as I know, I was only one of two believers among the staff. One day he and I were sitting in the lunchroom by ourselves, as he was enjoying the sort of large, very red apple that grows in British Columbia and Washington State. I pointed at his apple and exclaimed, “Our Father made that!” Instead of receiving the positive response I expected, he said something to the effect of: “I don’t necessarily share your perspective.” He might as well have added, “You fundamentalist simpleton, living in a fantasy land you call ‘faith!’ Don’t you know the slightest thing about botany? This apple is a cultigen, the product of ‘a plant that has been deliberately altered or selected by humans; …the result of artificial selection’ (https://en.wikipedia.org/wiki/Cultigen; cf. https://en.wikipedia.org/wiki/Red_Delicious).”

I was saddened by his reaction. It reminded me of my father-in-law’s concern when we were still fairly new parents. He had asked a couple of our young children if they knew where they came from. As a devout atheist himself, he didn’t appreciate that their answer was “from God.” He made it clear to us that he hoped we would eventually teach them “the truth.”

I was less surprised by my father-in-law’s reaction than that of my “brother in the Lord.” That atheists reduce life to nothing besides nature is understandable. To them, bringing in God at all is dismissed as make believe or worse. But for a theist to detach the fruit (literal fruit in this case) from God’s creativity completely undermines the essence of his creation.

Pitting science against faith reflects misconceptions about each. Science is a useful tool in the analysis of nature. It can reveal how the natural world works. I find it curious however, that it is often presented not only as a system of exhaustive knowledge of everything there is to know, but also as a complete unchanging body of thought. For example, we hear politicians claiming that their particular policy on a certain issue is based on “the science.” Not only is science, good science at least, an ongoing investigation of observable natural entities and processes, it is always open to new information, which should challenge previous conclusions. Moreover, science is not the knowledge of everything. By itself, it is not very useful in determining its application. Just because we discover something can be done, doesn’t mean it should be done.

Faith, at least of the biblical variety, which I hold to be its only legitimate form, is not a denial of the natural world. Far from it! Faith is the lens by which we can most clearly observe the world in which we live. Well-informed biblical faith enables us to discover the “shoulds” of life, not by being blind to the world, but by the best understanding of it.

I know full well that my colleague’s apple was the result of years of careful cultivation on the part of human beings, just like I (and my children) know how babies are made. But life is far more than mechanical, naturalistic processes. The universe we inhabit is a vast and complex dynamic system designed, implemented, and sustained by God within which his plans and purposes are worked out. The Creator has assigned human beings to represent him by overseeing and caring for his creation. Our lives are to reflect God and his character in everything as we hear his voice and do his will. He then, as our ultimate Father, demonstrates his love through his providential care in and through the creation, including you, me, and others. This is most fully expressed in the gift of his Son in the person of the Messiah, through whom we are reconciled to him.

It is when we are in right relationship with God through Yeshua that we can appreciate the basic, though broken, goodness of the creation. Faith is that which enables us to see the creation’s goodness for what it really is. How the mechanics of the entire system of creation works, I don’t know. God bless the scientists as they do their work. What I do know is that every apple, every child, every good thing we enjoy, is a precious and deliberate gift from our loving Heavenly Father. To miss that is to miss what creation is all about.