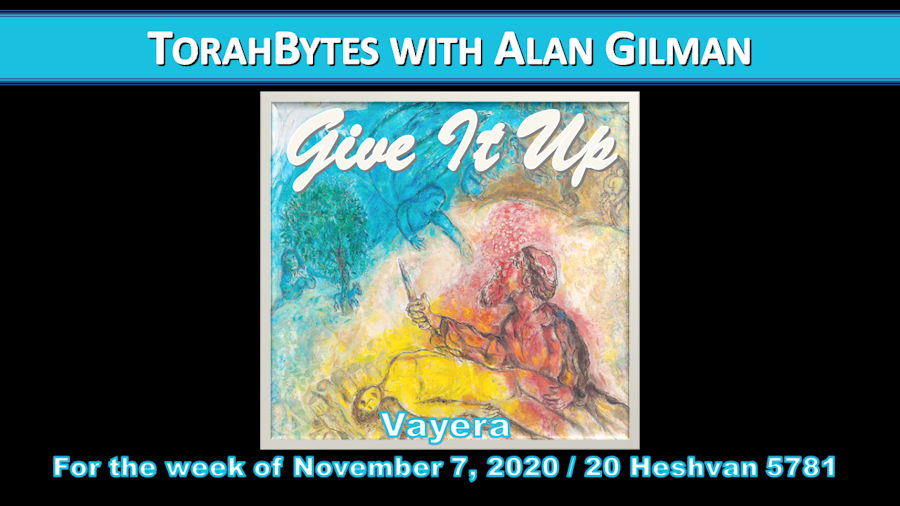 “The Binding of Isaac,” as it is called in Jewish tradition, is a most disturbing story. Readers have struggled with how it could be that the God who reveals himself as “abounding in steadfast love and faithfulness” (Shemot/Exodos 34:6) could demand the sacrifice of another human being, let alone one’s own son. Clearly it was never God’s intention that he would go through with it since he stops Abraham at the last moment. While God was not going to allow Isaac to be sacrificed, what was the purpose of telling Abraham to do so in the first place?

The answer is in what God said to him following: “Now I know that you fear God, seeing you have not withheld your son, your only son, from me” (Bereshit/Genesis 22:22). God was testing the state of Abraham’s relationship with him based on whether or not he would withhold Isaac from him. The result was an affirmation of God’s earlier promises to him. Isaac was key to the fulfilment of the promises to be a great nation that would bless the entire world. The passing of this test was essential for these promises to come to fruition.

Abraham had gone through so much between God’s call on his life and this point. Leaving family and the familiar behind, he travelled to a strange and hostile land. Already well advanced in years, he and his wife were childless. This did not prevent Abraham from trusting God’s promise of becoming a great nation and possessing this land one day. He had no clue that it would be twenty-five years before the son of promise would be born. And now, everything hinged on Isaac. It was on Mount Moriah, where one day the Jerusalem Temple would be built, that God called for extreme relinquishment in order to move forward in the unfolding of his plan. Why was that so necessary?

Let’s fast forward two thousand years. Overlooking Mount Moriah, the Temple Mount, is the Mount of Olives. It’s there the Messiah would face his own test of relinquishment. After spending three years of teaching on God’s Kingdom and demonstrating its power, preparing his followers to carry on his mission, he had a date with destiny. Prior to this, he had sought to explain to his followers several times that it was necessary for him to suffer, die, and rise back to life. They couldn’t comprehend that the Messiah would do anything but lead them and the nation of Israel in victory over their oppressors by military means. Regardless, he was resolute that he must face a deadly onslaught of darkness. However, on the eve of his arrest, knowing what he would have to endure, he pleaded with his Father in heaven in agonizing prayer for a way out. Perhaps there might be some other way to fulfill God’s plan without having to suffer under the misrepresentations, mockery, beatings, and execution that lay before him. Despite his earnest desire for an alternative, he was clear: “not as I will, but as you will” (e.g. Matthew 26:39). Once he fully relinquished his claim on his life, he was ready to complete the task before him.

What may not be obvious is how for both Abraham and Yeshua these acts of extreme relinquishment work against the thrust of the curse that has oppressed the world since Adam and Eve. God’s original design for the creation called for human beings to oversee Planet Earth under God’s rule. Instead, our first parents turned from God to the Evil One, resulting in our becoming subservient to the creation rather than being its masters.

It is this oppressive situation that God sought to resolve from the beginning. He initiated a plan to break the curse, a plan which began with Abraham and developed over time within the context of the people of Israel and came to fruition in Israel’s Messiah. In order to be restored to our rightful place as stewards of the creation under God, we like Abraham and Yeshua need to relinquish our claim upon our own lives. It is when we die to self and the things of the world, that we begin to truly live.