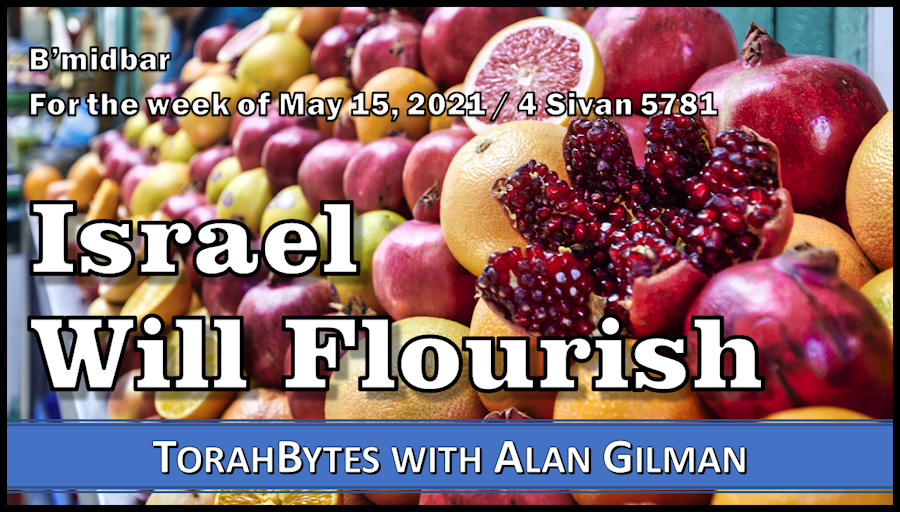 Yet the number of the children of Israel shall be like the sand of the sea, which cannot be measured or numbered. And in the place where it was said to them, “You are not my people,” it shall be said to them, “Children of the living God.” (Hosea 2:1 [English 1:10])

This week’s parsha is the first of the fourth book of the Torah. The Hebrew title, “B’midbar” (“In the Wilderness”) is taken from the first sentence of the book, and aptly describes much of its overall content as we read about Israel’s journey through the wilderness. The English title, “Numbers,” is a translation of the Greek title “Arithmoi” and is due to the long description of Moses’s census of the people. The choosing of the accompanying Haftarah reading from the prophet Hosea is likely because of its reference to “the number of the children of Israel” I quoted at the start.

Paul’s quoting this passage in his letter to the Romans is often misunderstood. Tragically, he tends to be misrepresented regarding his understanding of God’s relationship to the Jewish people in the New Covenant era. This Hosea passage is quoted by Paul early in the section of Romans where he discusses that very issue (see Romans 9-11). It is most likely there were non-Jewish believers in Rome who had deduced that God had rejected the descendants of Abraham, Isaac, and Jacob due to the combination of a significant amount of Jewish people who were antagonistic to Yeshua’s messianic claim and the openness to Yeshua on the part of a number of Gentiles (non-Jews). But Paul states that the rejection conclusion is both ignorant (see Romans 11:25) and arrogant (see Romans 11:18). God’s faithfulness to Israel was always and continues to be based on his unchanging, unconditional promises to Abraham, Isaac, and Jacob. The current situation, however perceived, in no way undermines that.

However, there are two places in Romans that can appear to support the rejection scenario. The first is 2:17-29. This is where Paul defines what constitutes a genuine Jewish person. But contrary to the conclusions of some, he is not establishing a notion of the “spiritual Jew” in contrast to Jews by natural descent. Rather, he is emphasizing that the matters of the heart are more important than external forms. This is in keeping with the prophetic tradition of the Hebrew Scriptures and the teaching of Yeshua that religious rituals, while having their place, are not that which express true godliness. What really counts is (in no particular order) faith, love, mercy, truth, humility, justice, and so on. Yet people, not just Jewish people, have always tended to focus on externals. Paul is not claiming that Gentile believers are the real Jews, while the natural ones are not.

Romans chapter nine, where he quotes our Haftarah, also tends to be misunderstood. To conclude Paul means anything but that God has not rejected natural Israel completely ignores God’s message through Hosea. God called Hosea to graphically illustrate God’s love for Israel by having him marry an unfaithful woman. Hosea’s heartbreak over his wayward wife is likened to God’s own yearning for his people. By Hosea’s referring to “the number of the children of Israel shall be like the sand of the sea,” God confirms his promise made to Abraham (see Bereshit/Genesis 22:17). And by quoting Hosea, Paul is doing the exact same thing. That Gentiles who have put their faith in the Jewish Messiah are accepted as God’s children too, does not negate God’s faithfulness to Israel.

We need to remember that the purpose of God’s promise to Abraham and his natural descendants through Isaac and Jacob was to bless the nations (see Bereshit/Genesis 12:1-3), which, according to Paul, is the very essence of the Gospel (see Galatians 3:8). The inclusive nature of the New Covenant in Yeshua is not an abrogation of his particular purposes regarding Israel.

To use New Covenant inclusiveness to redefine Israel as the generic community of believers is to negate God’s commitment to the forefathers. Undermining his faithfulness to natural Israel defames his character and puts the onus of his acceptance on human performance rather than on his mercy and grace.

But if we listen carefully to God’s reaffirmation of his promise to Israel through Hosea and Paul, then we have grounds for hope. That Israel will flourish in spite of the common human tendency shared with the rest of the world to wander from God encourages us to trust God in the midst of every challenge we might face.