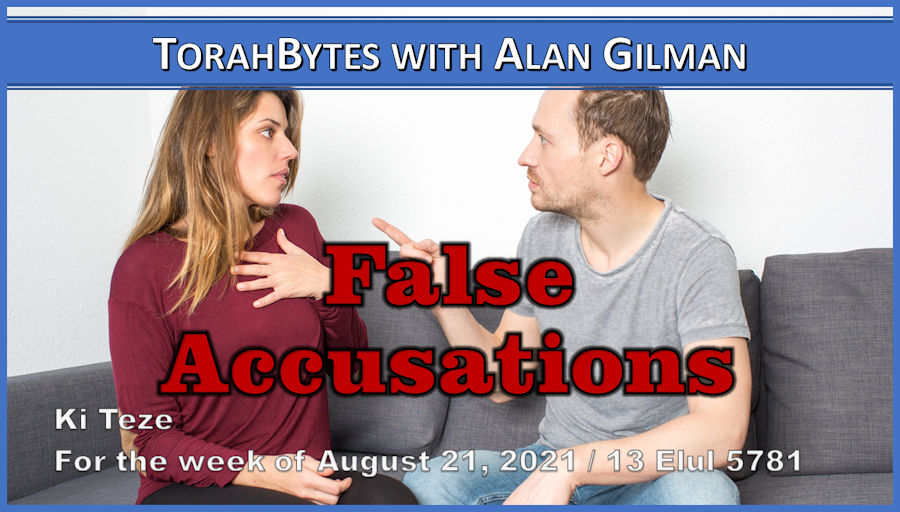 If a man marries a woman, has sexual relations with her and then, having come to dislike her, brings false charges against her… (D’varim/Deuteronomy 22:13-14)

Many people assume that the Bible is an archaic, backward book, written when people were superstitious, given over to mythical stories, and all round ignorant – nothing like we are today: enlightened, progressive, and intelligent. This might be hard to accept, but very little about humans has changed since the beginning, except for technological advances. We continue to do what we have always done, just faster and more efficiently. And that goes for things both good and bad.

This is not to say that the ancients weren’t superstitious. Many were. But many still are today. We continue to believe in all sorts of fanciful ideas, and ignorance over life essentials is rampant. Yes, much has been learned through the millennia, while some basic lessons of life continue to be ignored. The idea that people started off ignorant and foolish and have been progressing mentally and morally since then has no basis in fact.

One of the areas where the progress assumption is strongest is with regards to the Bible’s view of women. Some will even use the Bible itself to back up this claim by comparing the Old and New Testaments’ depictions and treatment of women. It is typical to assert that Yeshua was the great liberator of women, since he freely engaged females and considered some as associates in his work. That he did that is indeed the case, but making it sound as if he was being so-called progressive isn’t valid. Even a casual reading of his interactions with women demonstrates there was no scandal or even concern over them. There is his disciples’ questioning over the Samaritan Woman in John chapter four, but it isn’t clear from the text exactly what their issue was.

This is not to say that the world of that day, Jewish or otherwise, was necessarily altogether correct, vis a vis women’s rights. Certainly, all sorts of injustices were done unto women, but injustices of all kinds occurred to both men and women and have continued to this day. Whether or not we have significantly progressed to a higher moral plain is difficult to determine.

What we can determine, however, is that the whole Bible, Old and New Testaments, has a high regard for women. The divinely inspired wisdom of Scripture is displayed within a realistic view of life. Simply stating that all people should be treated equally does nothing to alleviate harmful behavior. But God knew that if left unchecked men and women would abuse each other.

In this week’s parsha, we have a situation where a man accuses his wife of deceitful impropriety prior to their marriage (see D’varim/Deuteronomy 22:13-21). The penalties for slander on the part of the man or impropriety on the part of his wife are harsh by today’s standards, but note the equality shown towards each party. If the man’s accusation is correct, then the woman was to be executed, the normal penalty for such things. But if the accusation is false, he was to be whipped, fined, and not allowed to ever divorce her. I know some will find these consequences backward in the way I referred to at the beginning, but don’t miss the sentiment here. Contrary to popular misconception, wives weren’t property to do with whatever their husbands pleased. Men were not allowed to say whatever they wanted about their wives and get away with it. There were repercussions for false accusations against women. These directives were designed to keep male selfishness in check. Yet, there is no preferential treatment here. Justice was to be done regardless of which partner was at fault.

There’s more. If I read this correctly, the result of God’s word here goes beyond this specific scenario. Because God provided a disincentive regarding false accusations, one would hope that men should think twice before acting on their suspicions toward their wives. In that day as well as our own, accusations in and of themselves destroy people’s reputations whether or not the accusation is valid. Yet, unlike in Moses’ time, there are no penalties for falsely accusing someone. Unlike the Torah, many justice systems tolerate false accusations to encourage victims to come forward. But that’s not just. True justice shows no bias toward supposed victims nor alleged perpetrators. Everyone should be treated fairly before the law. To allow otherwise is not progress.