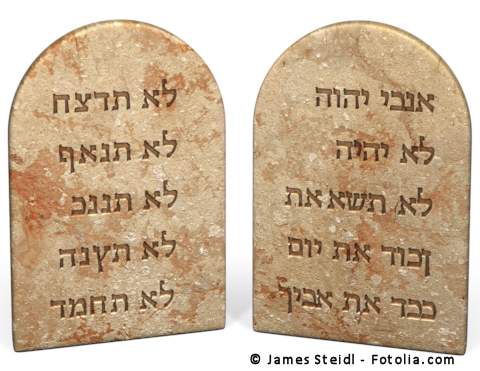 And God spoke all these words, saying, “I am the LORD your God, who brought you out of the land of Egypt, out of the house of slavery. You shall have no other gods before me.” (Shemot/Exodus 20:1-3)

The Ten Commandments function in a most special way within holy scripture. You may not be aware that they are never actually called the “ten commandments,” but rather, eseret ha-devarim, “the Ten Words” (see Shemot/Exodus 34:28). Obviously the Hebrew is indicating that this is much more than a list of ten individual words. Rather they are ten unique divine utterances; unique in several ways.

First, the Ten Words were the only part of God’s revelation to Moses that was given in the direct hearing of the people (see Shemot/Exodus 20:18-21). It isn’t clear if they heard the actual words, but whatever they heard, they were so terrified, they never want to experience it again.

Second, of all that Moses received from God, only these Ten Words were written by God’s own finger. In fact, he did so twice, due to Moses destroying the first set in reaction to Israel’s rebellious activities while he was with God on the mountain (see Shemot/Exodus 31:18; 34:1).

The third and perhaps most important way the Ten Words are unique is that they, in particular, are called “the covenant” (see Shemot/Exodus 34:28). This would be why they were among the items that were placed inside the “aron ha-berit,” the Ark of the Covenant.

There was of course more to the covenant given at Mount Sinai than just the Ten Words. The Ten served to point the people to the details of the entire covenant. They weren’t necessarily more important than any other of God’s directives, but what they do is capture the essence of the whole covenant, while the rest of Torah elaborates on them. The ten, then, especially as a collection, have an essential symbolic function in that they represent the whole Sinai covenant.

It is not biblically sound, therefore, to isolate or detach the Ten Words from the rest of Torah as if God gave these directives as universal principles, while everything else he revealed through Moses was for Israel alone. This is not to say that the Ten Words or anything else in Torah aren’t necessarily universal. It’s that it is not right to automatically consider them as universal just because they are the Ten Words.

Biblically speaking, the Ten Words first and foremost function as covenant, not moral principles. They (as much of the rest of Torah) are full of morality, but primarily they establish the basis and parameters of God’s relationship with ancient Israel. That is why the Ten Words begin with “I am the Lord your God, who brought you out of the land of Egypt, out of the house of slavery” (Shemot/Exodus 20:2). Israel was to obey God’s commands on the basis of their having been rescued from Egypt, something which no other nation can claim. Note that Israel’s salvation and relationship to God were established by God first before he gave them directions to live by. Biblical morality was never intended to be a pathway to God, but rather a response of God’s people to his love and faithfulness.

Living God’s way under the New Covenant is similar in that it too is a response to God’s salvation. This time not only as the nation of Israel who were in physical bondage to Egypt, but people of all nations who have been released from the greater bondage to sin and death through faith in the Messiah.

But as those who have a relationship with God through Yeshua, how do we live? While many have adopted the Ten Words as their moral code, others have rejected most, if not all, the commands given through Moses as being relevant today. Some claim that Yeshua replaced an older notion of hundreds of commands with only two (love God and love your neighbor) as if God is now lenient instead of strict. But that’s not what is going on here at all. Yeshua’s answer to the question concerning the greatest commandment (see Matthew 22:36-40) provides perspective and priority in relating to God. These two commands therefore serve as a summary of everything God calls us to.

But what does he call us to? Under the New Covenant, Torah, which was at one time written on tablets of stone, is now engraved upon our hearts (see Jeremiah 31:31-34; 2 Corinthians 3:3). That which was external has been internalized. This transformational change brought about by Yeshua’s death and resurrection allows us to live out the essential elements of God’s revelation through Moses including the Ten Words, but within a new covenantal arrangement. We will look at how this works out practically next week.

6 thoughts on “The Ten Words”