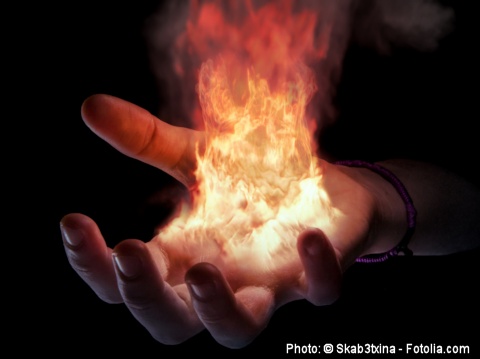 Now Nadab and Abihu, the sons of Aaron, each took his censer and put fire in it and laid incense on it and offered unauthorized fire before the LORD, which he had not commanded them. And fire came out from before the LORD and consumed them, and they died before the LORD. (Vayikra/Leviticus 10:1-2)

It is incidences like this one that challenges pop notions about God. Perhaps it also reinforces an older view that helped create the current one. It seems that there was a time when the God of the Bible was depicted as a big angry man in the sky, who was just waiting for one of his lowly human creatures to mess up, so he could give him what for. I don’t know if this is myth or not, but this depiction of the Great and Awesome Holy God was completely devoid of love, mercy, forgiveness, and acceptance.

We don’t hear too much about the Great and Awesome Holy God anymore. He has been replaced by a far gentler, tolerant, and understanding universal force known for his unconditional love.

From a biblical perspective both of these caricatures of the God of Israel are inaccurate. From Genesis through Revelation, his love, mercy, forgiveness, and acceptance are essential aspects of his character. From the moment the human race fell into the clutches of evil, he has been determined to rescue us (see Bereshit/Genesis 3:15). The reason for calling Abraham and developing the nation of Israel was to bring the blessing of life to the whole world (see Genesis 12:1-3). The whole story of Israel is one of a loving Father yearning for the welfare of his people with the goal of the promised blessing enveloping the globe. The greatest expression of this love is evidenced in the gift of the Messiah, his Son, along with an invitation to all to receive eternal life (see John 3:16).

If this is true, what do we do with a story like Nadab and Abihu? How could a God of love strike down Aaron’s sons like this? Apart from offering “unauthorized fire,” we don’t even know exactly what they did wrong. They may have been drunk (see Vayikra/Leviticus 10:8-9). But the prohibition against priests being under the influence wasn’t given until afterward. Whatever the reason, it resulted in a most drastic response from an otherwise merciful and loving God.

This is not an isolated case. Through the Hebrew Scriptures, we see God harshly punish people. For some, the activities of a wrathful God is a so-called “Old Testament” phenomenon, but that simply isn’t true. This same complexity of character is revealed in the New Covenant Writings as well. While love, mercy, forgiveness, and acceptance are so central, Yeshua has harsh and even cold words for all sorts of people. Later, God kills two people for spiritual hypocrisy (see Acts 5:11), and Paul even strikes a person blind who was getting in the way of God’s love (Acts 13:4-12).

Believing in a god who only does nice things is escapism. It might make you feel better to think that God’s love is warm and cozy fluff that wants nothing more than to coddle you in your dysfunction. But God loves you too much to simply give you whatever you want. The love of God is love on his terms, not ours. He is overwhelmingly merciful and accepting, but only if we are willing to come to him his way, by repenting of our sins and humbly trusting in the Messiah Yeshua.

And once we experience his forgiveness and acceptance in Yeshua, that doesn’t mean we can do whatever we want. It’s true that God isn’t waiting to blast us for the smallest slip-up. He is way more patient than that. But if we think we can take his love for granted, and assume that he will put up with our irresponsible behavior, we are fooling ourselves. I don’t know what your “unauthorized fire” might be. But don’t wait until it’s too late.

One thought on “Unauthorized Fire”