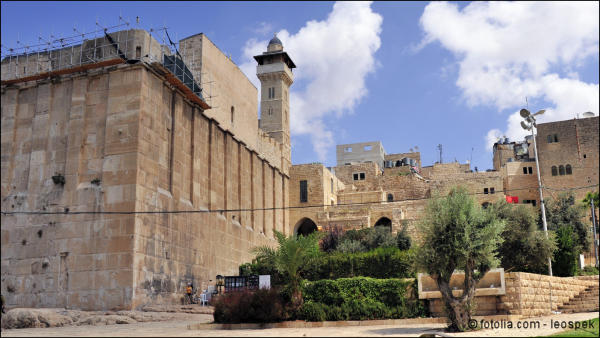 Cave of the Patriarchs in Hebron, Israel. Traditional site of Sarah’s burial plot.

Abraham listened to Ephron, and Abraham weighed out for Ephron the silver that he had named in the hearing of the Hittites, four hundred shekels of silver, according to the weights current among the merchants. (Bereshit/Genesis 23:16)

Recently the United Nations Educational, Scientific and Cultural Organization (UNESCO) passed a resolution which effectively denied any Jewish connection to the Temple Mount in Jerusalem. I can’t say I am surprised. But that’s not just because UNESCO, like much of the UN, is currently controlled by anti-Jewish/anti-Israeli interests. At the risk of sounding overly dramatic, since world forces are fundamentally opposed to biblical truth, we can expect little resistance to anything that undermines what the Bible teaches. But note that even Christian-dominated countries did little to nothing to oppose the resolution.

But why should this matter? Should we expect something different from political entities? Probably not, but the general apathy on the part of most Christian leaders to this is still disconcerting. Again, not that I am surprised by the lack of reaction. I have come to expect it, since unless it is something that is of immediate and personal consequence, most believers don’t understand the relationship of their faith to the world in which they live. They tend to regard the spiritual world as the real world and the physical world as an illusion. But this is not how our sacred writings view God’s creation. According to Scripture, spiritual reality is worked out within the physical realm.

We often hear preachers and teachers wax eloquent over the historicity of our faith; and well they should. We serve a God who has made himself known within history. The greatest lessons of Scripture are expressed through actual events. To deny this is to deny the Bible and everything it teaches. But that doesn’t only apply to the most notable happenings such as the exodus from Egypt or the resurrection of Yeshua. It applies to every historical event recorded in Scripture. Most basic of all is that God purposely staged his written revelation in the context of his unconditional promises to Abraham, Isaac, and Jacob. It’s this Jewish historical context of Scripture that defines everything the Bible teaches. To not care about this frontal attack on the essential Jewishness of the Temple Mount is to not care about the veracity of the Word of God. The ever-increasing over-spiritualization of Scripture will continue to detach otherwise well-meaning believers from effective engagement within the world where God has called us to live.

That’s why this week’s parshah (Torah-reading portion) is so important for it represents the small beginnings of Abraham’s acquisition of the land promised to him by God. The account of the purchase of a burial plot for Sarah, Abraham’s wife, functions as a legal document to establish a practical ongoing connection to Abraham’s descendants through Sarah. Jewish claim to the land, therefore, is not just a story, but a historic and legal fact – a fact that will continue to be attacked. To deny this claim, like the denial of the Jewish connection to the Temple Mount, is to deny Scripture.

The biblically based Jewish claim to the Land of Israel will continue to be one of the most contentious and crucial issues in our day. Followers of the Jewish Messiah cannot ignore this. The truth of Scripture and your effective service to God depends on it.