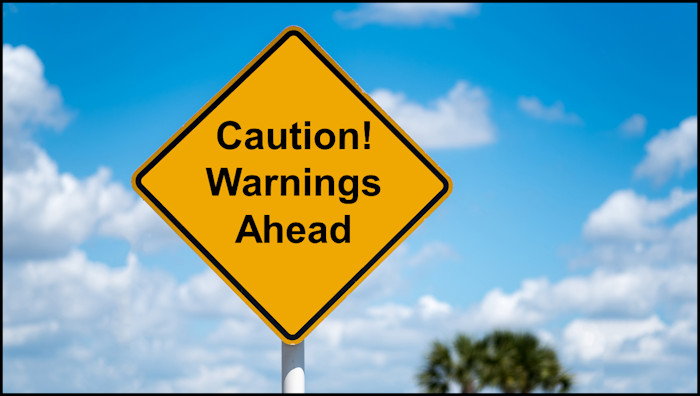 Have you ever seen one of those lists of “interesting” warnings for various products? For an iron: “do not iron clothes on body.” For a microwave oven: “Do not use to dry cats and other pets.” One would assume that such things would be so obvious, they wouldn’t need to be mentioned. But, then again, I am sure my readers and listeners could send me stories of things they or people they know have done that might merit such warnings.

We tend to label some of the things we humans do as foolish or idiotic, but I don’t think this is necessarily an issue of intelligence or lack thereof. Some of our most ridiculous decisions are due to our thinking, at the time at least, of something as a good idea, even the best idea. Pressures from others and of time, lack of information, and inexperience can all lead to serious miscalculations in judgement.

The thing that happens in the moment, and this is true for all sorts of choices we make, big and small, is that we perceive that the benefit of our course of action outweighs the negatives. This is not only the case for bad decisions, but for good ones as well. Surgery, for example, often has significant downsides. Even without the risk of infection and death, there’s the inconveniences and discomfort. Yet the potential benefit is so great, we are usually willing to give up our normal comfort and schedule for the sake of the hoped-for benefit.

This is how sacrifice often works. We give up something of value in the hope of something better. This is not only true in the spiritual/religious realm. We might do without something we would like now in order to save money and be able to acquire something better later. This explains to me why we need the warnings against child sacrifice. I know that sounds like quite the jump, but don’t give up on me yet.

It might seem like a ridiculous warning, but God directed Israel away from child sacrifice. This was a particular ritual in the worship of Molech. People used to burn their children as an offering to this false god. Why would anyone do such a thing? Whatever an individual’s motive may have been, somehow they concluded that the benefits of their child’s death in this way not only outweighed the loss of the child, but the suffering he or she would experience.

What could be so good to warrant child sacrifice? Maybe it wasn’t the sense of reward from the false god that motivated the offering. Perhaps it was the relief of not having to care for the child. If the god is happy to relieve me of my parental responsibilities, I may be happy to worship him like this. Either way the sacrifice of the child outweighs preserving him or her.

I am not aware of formal Molech worship today, but its essence permeates much of the world. Is this about elective abortion? I would include that, but to regard abortion as the only form of child sacrifice today is to miss the point. The real question we need to ask ourselves is how much are we valuing other things over children. I am not saying we should be child worshippers. That’s a different issue for another day. But how much of resistance to marriage and childrearing is due to supposed other benefits? According to God’s value scale, is career, success, money, vacations, convenience, freedom, and so on, really more valuable than children? If not, then why are there over 50 million abortions a year and a below replacement birthrate within affluent countries? If so, then perhaps the warning isn’t so ridiculous after all.