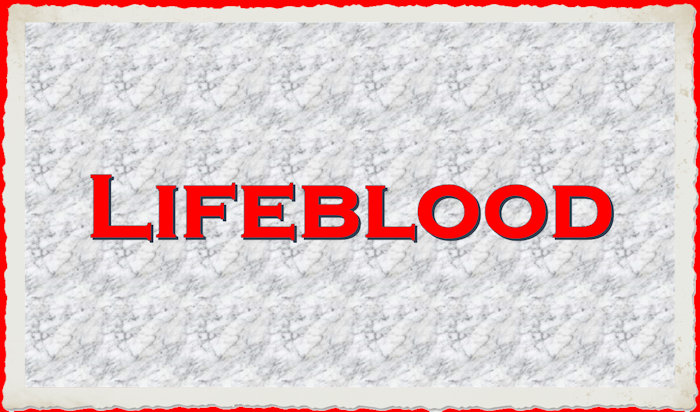 For the life of the flesh is in the blood, and I have given it for you on the altar to make atonement for your souls, for it is the blood that makes atonement by the life. (Vayikra/Leviticus 17:11)

This statement by God through Moses clarifies the sacrificial system’s operative dynamic. Or, in other words, that which makes sacrifice work. Within God’s design of creation, a creature’s life was in its blood. Whether this be metaphorical or literal, I can’t say for sure, though I suspect it’s both. The blood on the altar represents the giving up of the life of the sacrificed animal.

So, it’s not so much the physical presence of blood that makes atonement. The word for atonement, “kaphar,” means “to cover.” And while blood is an effective covering; it’s the life which the blood represents that is doing the covering. That which needs to be covered is our souls. What is missed in English, however, is that the word “life” in the phrase “the life of the flesh is in the blood” and the word for “soul” here is the same Hebrew word “nephesh.” If we more precisely reflect the Hebrew word in both cases, we would better understand that the Jewish sacrificial system established that it was the giving of the offered animal’s life that provided cover for human life.

Why covering? Our first parents were created by God to have intimate unobstructed fellowship with him. When they turned to the creation over against the creator by heeding the voice of the serpent over against God’s word, they were overwhelmed with shame, attempted to cover themselves with leaves and hide. They knew they were no longer fit to be in God’s presence in this condition. Their being cast out of the garden reflected the resulting distance between them and God. Every additional misdeed done by them or their ancestors (including us) is a manifestation of the twisted nature they introduced to humankind. It would require the tragic ongoing loss of life to allow for any semblance of fellowship with God by covering the shame of human sinfulness.

For the nation of Israel, all the sacrificial system could do was maintain the tentative presence of God in their midst. It was a needed, albeit temporary, solution to the sin problem that did more to remind the people of Israel of the problem than to resolve it. As we read in the New Covenant book of Hebrews:

For since the law (Torah) has but a shadow of the good things to come instead of the true form of these realities, it can never, by the same sacrifices that are continually offered every year, make perfect those who draw near. Otherwise, would they not have ceased to be offered, since the worshipers, having once been cleansed, would no longer have any consciousness of sins? But in these sacrifices there is a reminder of sins every year. For it is impossible for the blood of bulls and goats to take away sins. (Hebrews 10:1-4).

The stopgap measure of the ancient sacrificial system prepared Israel and the world for the life that would not only cover human shame but release us from it forever. The shed blood of the Messiah is the giving of his sinless life, not only for Israel, but for anyone who avails himself or herself its power. It’s the giving of his life on our behalf that reestablishes intimate relationship with God. It’s no wonder that within forty years of his death the sacrificial system would be no more. The Messiah’s lifeblood is now freely available to all.