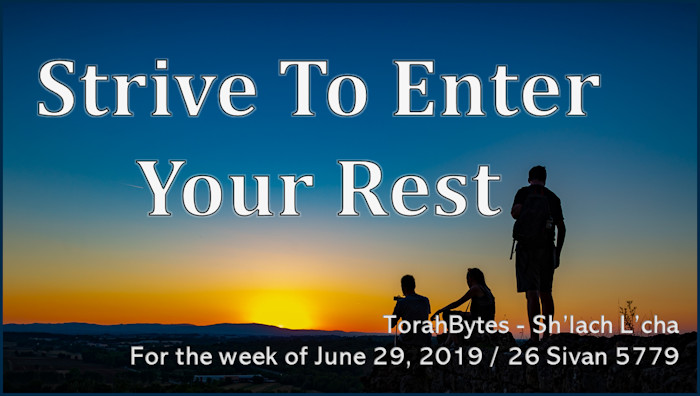 Not one shall come into the land where I swore that I would make you dwell (B’midbar/Numbers 14:30)

This week’s parsha (weekly Torah portion) contains one of the most tragic, yet instructive, episodes in the Bible. The people of Israel are on the brink of attaining the promise first given centuries earlier to Abraham. After all the patriarchs went through followed by years of slavery in Egypt, this generation witnessed evidences of God’s faithfulness and power like no one else before or since. It’s been two years since the ten plagues and the parting of the Red Sea. They have known miraculous provision of food and water. God enabled them to face battles and saw them through all sorts of other challenges.

Now it’s time for Israel to enter the next chapter of their history. Everything up to now was preparation for this moment. It’s time to acquire their God-given inheritance, the Promised Land. To do so would not be easy, however. Without God’s help, it would be impossible. But they had God’s help. They knew that. They were trained by him for this. Sadly, this wasn’t enough for them. After receiving the report from the scouts who spied out the Land, the people were too afraid to do what God was calling them to do. Somehow, they were not able to bridge their past experiences into the intimidating future. In spite of God’s continual demonstration of his powerful presence among them, they somehow couldn’t apply what they had already experienced into the new situation. As a result, except for two exceptions, Joshua and Caleb, all the adults were destined to die in the wilderness as the nation was sent wandering for an additional thirty-eight years. At least the next generation would succeed where their parents had failed.

This episode is taken up by the writer of the New Covenant book of Hebrews. He is writing to a community of Jewish Yeshua followers who were giving in to a fear something like that of the Israelites here. They too had previously encountered the reality of God, for some time demonstrating genuine trust amidst all sorts of difficulty. Whether their current situation was considerably different from their past experiences, or the ongoing nature of their challenges was becoming too much for them, the writer calls them to learn from their ancestors’ failure.

The writer of Hebrews articulates the call to overcome their fears with this brilliant statement: “Let us therefore strive to enter that rest” (Hebrews 4:11). Striving to enter rest may seem like an oxymoron, but this captures the dynamic of genuine faith necessary to truly walk with God in any and all circumstances of life. The Promised Land is being regarded here as the place of rest. It’s the great destination where the fulness of God’s promises are to be attained. Their attainment is not granted on the basis of achievement, but rather as gifts received due to promise. The Promised Land and its blessing are derived via the graciousness of God unto his beloved chosen people.

While the inheritance is not the result of achievement, as if there is something to prove, it is not to be received with complete passivity either. Great forces of darkness stand in the way, threatening anyone who dares enter God’s place of rest, the fulness of life offered to us in the Messiah. Without unwavering trust in God and his word, we easily fall victim to evil’s snares.

It is pretty clear in Hebrews that this community of believers was beginning to succumb to the pressure they had endured for some time. The writer’s objective was to urge them forward before it was too late.

God has a place of rest for each one of us. Besides the hope of the new heavens and new earth upon Yeshua’s return, God has a unique inheritance for each one of us to attain even now. Evil’s armies will throw everything in our direction to dissuade us from becoming what God wants us to be. If you are reading this now, it isn’t too late for you. Don’t give in to the intimidation. Gather to mind every act of God’s faithfulness and power in your life until this moment and take whatever steps he is calling you to take and enter your inheritance. Strive to enter your rest.

One thought on “Strive To Enter Your Rest”