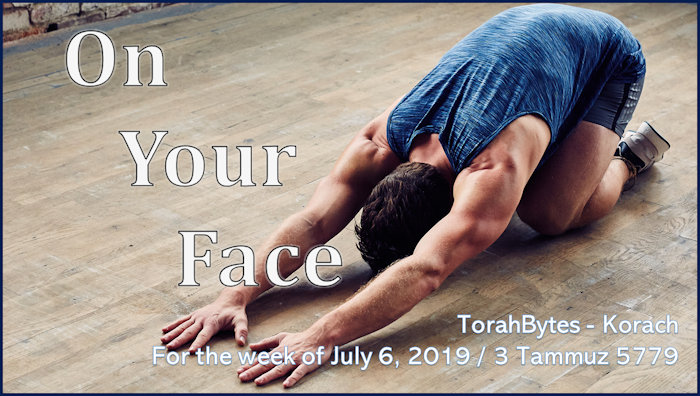 They assembled themselves together against Moses and against Aaron and said to them, “You have gone too far! For all in the congregation are holy, every one of them, and the LORD is among them. Why then do you exalt yourselves above the assembly of the LORD?” When Moses heard it, he fell on his face… (B’midbar/Numbers 16:3-4)

Moses went through a lot. He didn’t want this job in the first place. Many years earlier, he thought he would try to help his people by taking matters into his own hands. Now that he was older and wiser with the desire to be the Great Deliverer purged from his soul, it was God’s idea to send him back to Egypt. Although he resisted, God prevailed, and Moses became a leader.

I have heard it said that Moses’ being a shepherd in the wilderness was to prepare him to lead the people there one day. That may be true, but not in the way some people think. It wasn’t his knowledge of the wilderness itself that qualified him for the job. It wasn’t the day-in and day-out of sheep herding that taught him the group dynamics necessary to lead two million ex-slaves from bondage to conquest. The primary lesson he learned during those forty years prior to God’s call was to be dependent upon God.

Moses had gone from elite status in Pharaoh’s palace to the life of a fugitive, running for his life. Cut off from everything he knew, at age forty he had to start life all over again, so to speak, working a menial job.

This week’s portion includes an example of how he dealt with the predicaments he faced as God’s chosen leader of his people. When challenged by Korah and company, the Torah says, “When Moses heard it, he fell on his face” (B’midbar/Numbers 16:4). Only after that, did he give them an answer. Over and over again, whether Moses was confronting Pharaoh, speaking to the elders of Israel, or dealing with the people’s virtual incessant grumbling, he looked to God.

What a way to react to being confronted! He fell on his face! He wasn’t showing reverence to Korah, nor was he completely overwhelmed. This was Moses’ leadership posture. He looked to God. Then and only then did he deal with the situation.

We don’t find Moses finding guidance via his vast learning acquired in Pharaoh’s court or from his previous years of wilderness wanderings. Whenever he faced a situation he went to God. And it was God who gave him the wisdom he needed.

Isn’t this what we should all do? As we read in the New Covenant Writings:

If any of you lacks wisdom, let him ask God, who gives generously to all without reproach, and it will be given him (James 1:5).

So the next time you are in a situation where you need wisdom, maybe you should do what Moses did and get on your face.