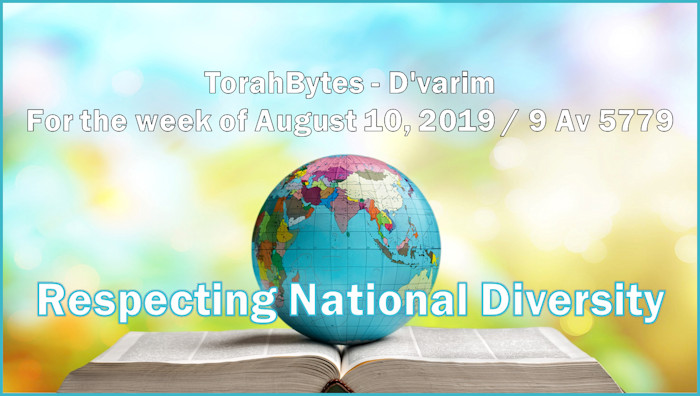 And the LORD said to me, “Do not harass Moab or contend with them in battle, for I will not give you any of their land for a possession, because I have given Ar to the people of Lot for a possession.” (D’varim/Deuteronomy 2:9)

Throughout the years of my doing TorahBytes I have sought to demonstrate the ongoing relevancy of the Hebrew Scriptures as built on the foundation of the Books of Moses. At times I do that by noting a specific principle found in one of God’s commandments or a lesson derived from a story. We might explore an aspect of the character of God, the nature of human beings, or the dynamics of how humans are to relate to God. But there’s more to learn from Scripture than principles and lessons. In fact, the principles and lessons of Scripture are deeply rooted in its perspective on life in general. It’s in the soil of the Bible’s worldview that we discover how our complex existence is best navigated.

It’s tragic when belief in Yeshua as Messiah results in the collapsing of the breadth and depth of Truth as revealed in the Hebrew Scripture into a detached spiritualized, overly personal experience. There is almost nothing of life, big or small, that isn’t effectively addressed by Scripture. We’re going to look at something big this week.

I think it’s an astounding insight. It was brought to my attention while reading The Philosophy of Hebrew Scripture by Yoram Hazony, and it is reflected in this week’s parsha. Israel was preparing to enter the Promised Land and needed to journey through inhabited territory. They were given specific instructions as to what territory they could take and what to leave alone. In this case there were told to not “harass Moab,” because God allotted their land to the descendants of Abraham’s nephew Lot. Israel’s acquisition of land was to be under God’s direction. We can look elsewhere in the Torah to see that God was very specific about Israel’s borders. They were given no mandate to expand beyond what was allotted to them.

Think about that. God made clear to Israel that they were not to build an empire but were to be satisfied with the geographical limitations imposed upon them by God. This is all the more astounding when we realize that Israel understood their God, rightly so, not as some sort of regional divinity, but the God of the whole world. The Bible begins with God creating the “heavens and the earth” (Bereshit/Genesis 1:1); God declares at Mt. Sinai, “all the earth is mine” (Shemot/Exodus 19:5); and Psalm 47 proclaims him as the king of all the earth and ruler of the nations. Be that as it may, instead of this “God of all the earth” commissioning his people to take over the whole world, he teaches them to respect national boundaries. And that in spite of the imperialistic tendencies of world powers both then and now.

This respect for nationality was firmly grasped by the leadership of Yeshua’s early community. In those first decades there were some who attempted to centralize the control of New Covenant faith within an exclusively Jewish context. As the leaders thrashed out the implications of how the Messiah’s message was reaching the non-Jewish peoples of their day, they realized that God was indicating that while the good news was for everyone, each people-group would be free through the power of God’s Spirit to work out how God’s kingship in the Messiah would be expressed within their cultural setting (see Acts 15).

Centuries later when messianic faith was co-opted by the Roman government, respect for national and culture differences faded and was replaced by age-old ungodly imperialist tendencies. Instead of continuing a de-centralized mosaic of nationalities, who were to find their way in God’s Truth with God’s help, church government aligned with political power to homogenize the nations under God.

In spite of this, God continues to regard the diversity of people groups while valuing national distinctions. We would do well to do the same.