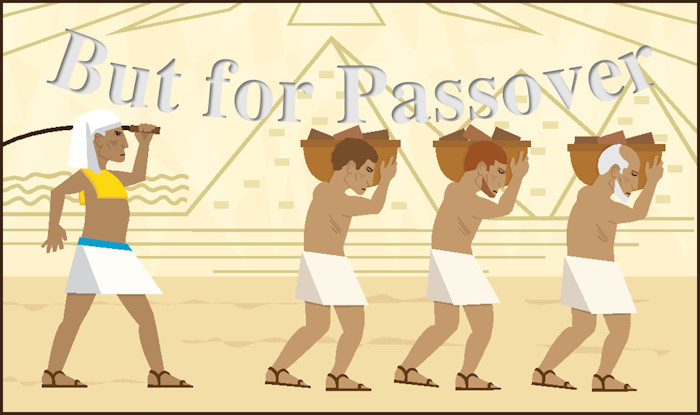 When we celebrate Passover, what are we commemorating? We were slaves; now we are free? That goes down well. Celebrating liberation is cool. Good script for a movie. But is that Passover? In a way it is if we consider the larger story. The people of Israel oppressed by an evil ruler to build his cities, subjugating them so that they don’t side with his enemies one day. In spite of his near-to-insane stubbornness, Pharaoh allows his free (to him) workforce to depart after the Angel of Death slays the nation’s firstborn, human and animal. Yet it isn’t until the parting of the Red Sea and the drowning of the Egyptian army that Israel is finally liberated from Pharaoh’s clutches for good.

That we remember the broader story under the title of Passover is understandable, but it’s all better labeled as “The Exodus” or something else that covers all the various events that resulted in Israel’s freedom. Why then Passover in particular? While the parting of the Sea was the final shutting of the door behind them, it was the death of the firstborn that flung open Israel’s long-time bolted prison door. Israel’s liberation wasn’t won until the tenth and final plague.

Pesach in Hebrew, Passover in English, describes the passing over of God’s final act of judgment on an oppressive regime. Death was coming to each and every home in Egypt. Nine horrific plagues weren’t enough to change Pharaoh’s mind. To think that anyone, no less a leader, would be willing to sacrifice the lives of his people for the sake of his pride. However shocking we may find that, I wonder how different we would be in his situation. Regardless, he was responsible for inviting God’s wrath upon an entire nation, the people of Israel included, but for Passover.

Passover was God’s prescription of protection and rescue. Follow the directions and avoid the inevitable. Whole families were saved from the deadly visitor, because they trusted in God and his word by smearing their doorframes with the blood of the lamb.

Egypt’s plight is the plight of the whole world. The self-centeredness of human beings throughout time has put us out of sorts with the Creator. Whether our dysfunction naturally leads to inevitable trouble or God’s anger burns against our abuse of his beloved creation, the Angel of Death hangs over us all, but for Passover.

We may be too distracted to be aware of the return of the Angel of Death. Whether he’s already come or on our doorstep; he’s not far away from any of us. The Oppressor has subjugated us into doing his bidding and is delighted to keep us in bondage until death has its way with us. But it’s Passover! We don’t need to be slaves to Evil’s agenda any longer. A greater Passover Lamb has come. The Messiah has shed his blood for our liberation. Now, like the Israelites of old, we need to avail ourselves of his protective covering by putting our trust in him. Then we can truly celebrate Passover, not simply to commemorate the ancient Israelites, but to join them as we leave bondage behind.