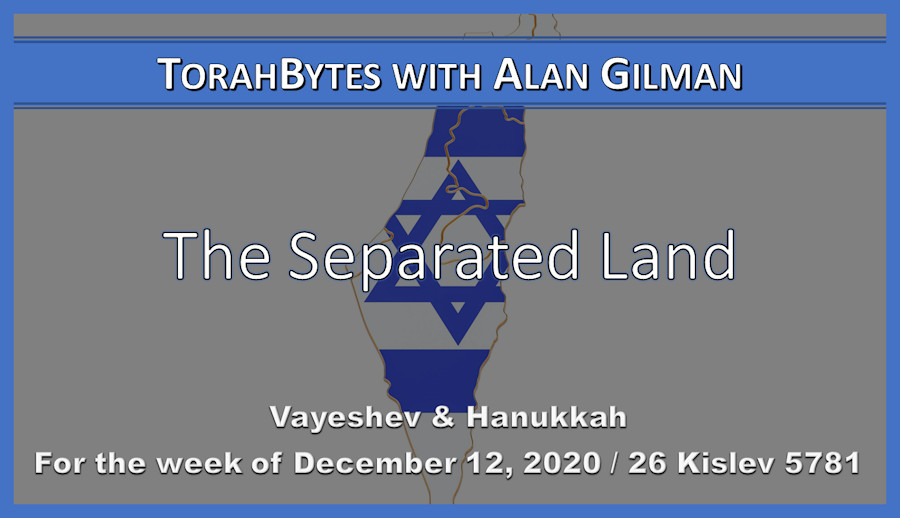 And the LORD will inherit Judah as his portion in the holy land, and will again choose Jerusalem. (Zechariah 2:16 [English: 2:12])

This verse is part of this week’s special Haftarah reading (supplemental reading recited on Shabbat and other holy days). It was most likely chosen due to its inclusion of the prophet’s vision of the temple menorah (English: lampstand), which is a feature of the commemoration of the eight-day festival of Hanukkah, which begins this year, Thursday evening, December 10.

What caught my attention is the reference to “holy land,” a term I have never been very keen on. To me, holy land conjures up images of religious pilgrims visiting religious sites having religious experiences. It’s not that “religious” or “religion” are bad terms in themselves. It’s that for some, religion becomes an end in itself, a compartment of one’s life detached from the other aspects of life. As a result, it takes on a sense of being unreal.

The teachings of Scripture, both the Hebrew Bible and the New Covenant Writings (the New Testament), are anything but unreal. They are so down to earth, whether in their narrative context of real people in real-life situations or their reflections on those events. When it comes to their exposition of life principles, besides the fact that the vast majority of these emerge out of real life, they themselves are practical, down-to-earth directions on how to live a good and fruitful life.

It seems to me that when some people think of the “holy land,” it’s a version of Israel separated from reality. Despite awareness of historical events that have occurred there, the actual Israel morphs into a fabricated backdrop, framing pre-determined spiritual sentiments. When such people visit the “holy land,” the real sights and sounds of what is perhaps the most vibrant and dramatic region on earth, becomes nothing more than fodder to fuel preconceived notions of disconnected faith.

But the term “holy land” is found in the Bible, appearing in the verse I quoted at the beginning as well as in Tehillim/Psalms 78:54: “And [the LORD) brought them to his holy land, to the mountain which his right hand had won.”). It’s not that I have a problem with the term itself. It’s that, as I just mentioned, it has been used to separate the Israel of the Bible from the Israel of real life. Ironically, the Hebrew word for “holy,” kodesh, means “separate.” This separateness of the land is not a separation from reality unto a disconnected spirituality. Rather, it is a statement of claim on the part of the God of Israel that he has separated this geographical region unto his particular purposes.

These purposes are anything but disconnected from real life, no less the real-life Israel of today. Core to the biblical record is God’s commitment to Abraham and his natural descendants that our destiny would be deeply entwined with the holy land (I write “our,” since I am one of those descendants). To separate the land from the people to whom God gave it is to separate it from God and his Word. In order to appreciate the holy land as the separated land it really is, we must reconnect it to its holy purposes.

This is what Hanukkah is about as it commemorates a time when evil sought to redefine the purpose of the holy land. Assimilation forces almost succeeded in absorbing Israel into the pervading culture. Unity and sameness almost overcame the God-ordained uniqueness of Israel. It took the bravery and determination of the Maccabees to restore both land and people to their holy purpose, a purpose to illumine the world with God’s love and goodness.

The separate nature of the land reminds us what true holiness is all about. Those who belong to the God of Israel by faith in Israel’s Messiah have been separated unto him and his purposes within the context of all of life. We need to guard against a false separation unto an unreality of superficial spirituality. Instead, we need to discover (or re-discover) our real-life calling unto what God has separated us unto in these interesting times.