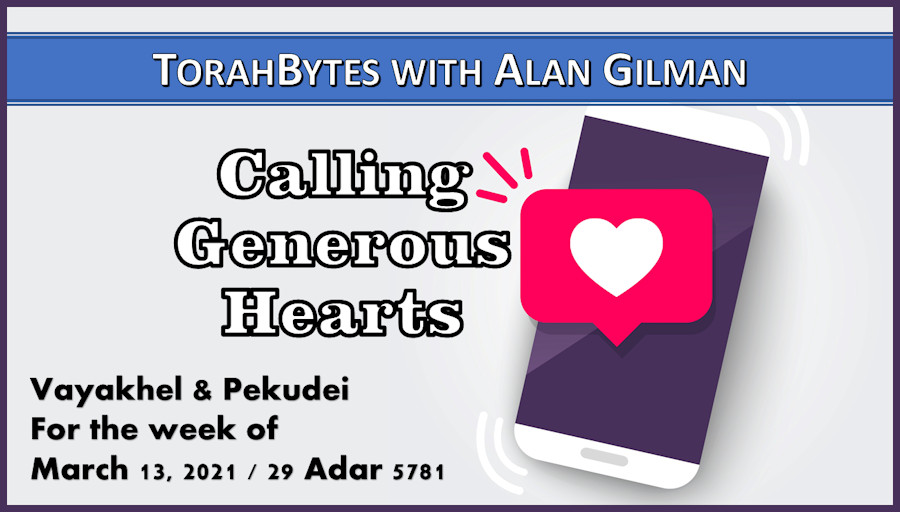 Moses said to all the congregation of the people of Israel, “This is the thing that the LORD has commanded. Take from among you a contribution to the LORD. Whoever is of a generous heart, let him bring the LORD’s contribution: gold, silver, and bronze; blue and purple and scarlet yarns and fine twined linen; goats’ hair, tanned rams’ skins, and goatskins; acacia wood, oil for the light, spices for the anointing oil and for the fragrant incense, and onyx stones and stones for setting, for the ephod and for the breastpiece. (Shemot/Exodus 35:4-9)

I love this passage! God through Moses initiated a building program. The people were called to contribute to the building of the mishkan, commonly referred to in English as the tabernacle. The mishkan was, the semi-mobile structure core to the sacrificial system. It was central to the life of the nation – literally – as it was to be erected in the center of the camp of Israel with the various tribal groups positioned around it.

Many readers of the Bible find the chapters about the mishkan, its furnishings, and procedures difficult. Most of the Bible from the beginning to these chapters in Shemot/Exodus are story orientated. Sure, there are a few long genealogies here and there, but interesting happenings for the most part. With the giving of the Ten Commandments in chapter twenty, there’s a shift to various regulations. Still interesting until the building instructions of the mishkan, etc. For many of us, these chapters are hard to relate to. Then we return to some significant drama with the Golden Calf and tense interactions between Moses and God. But after that there’s more chapters about the mishkan that repeat much of what was listed before. It’s not actually a repeat. The first set is the instructions; the second the actual building of it.

I like to point out, however, that while the details of the mishkan may not seem too relevant to us, they must be important to God. From ancient times, so much focus has been put on the stars and planets, but the Torah dedicates only a few words to their creation, while the mishkan gets several chapters. Perhaps we should pay more attention to what God focuses on.

I share this to underscore what this building project would have meant to God’s people at that time. So, when God called for contributions, one might expect that the demand upon the people would be pretty heavy. God has no issue about making demands. Yet, the call for contributions for the mishkan was completely voluntary.

This is not to say that every form of giving within the Sinai covenantal system was voluntary. The spiritual leaders were supported by the people’s giving of a portion of their annual prosperity. Certain sacrifices and other offerings were also compulsory along with an obligation to help the poor of society. And yet contributing to God’s building project was voluntary.

Leaders of faith communities need to take great care when calling for contributions. While members of congregations have a responsibility to support their communities, giving for building projects and other grand objectives in the name of God, need to be carefully weighed by the people. People should never be coerced into giving. Rather, the need of the situation should be presented in such a way that they should feel free to give or not.

This is what Paul in his second letter to the Corinthians intended when he wrote, “Each one must give as he has decided in his heart, not reluctantly or under compulsion, for God loves a cheerful giver” (2 Corinthians 9:7). The context is Paul’s encouraging the Corinthian believers to follow through on their promise to give – most likely to support the poor believers in Jerusalem (see Galatians 2:10). He reminds them that as we are generous towards others, God will be generous towards us. Still, the act of giving must not be coerced. Even in the face of need, each one of us are responsible before God to steward our resources appropriately.

That said, I would like to encourage us all (myself included) to take some time to consider where God is calling us to give. This past year of COVID has been disorienting. The lack of normal may mean a lack of exposure to the causes we are normally called upon to support. In today’s marketing saturated society, we may be waiting for “the ask,” before we give. All along it should have been God’s voice that we should have been attentive to. Now more than ever, we need to hear what he is calling us to do…not just with our money, but with our lives.