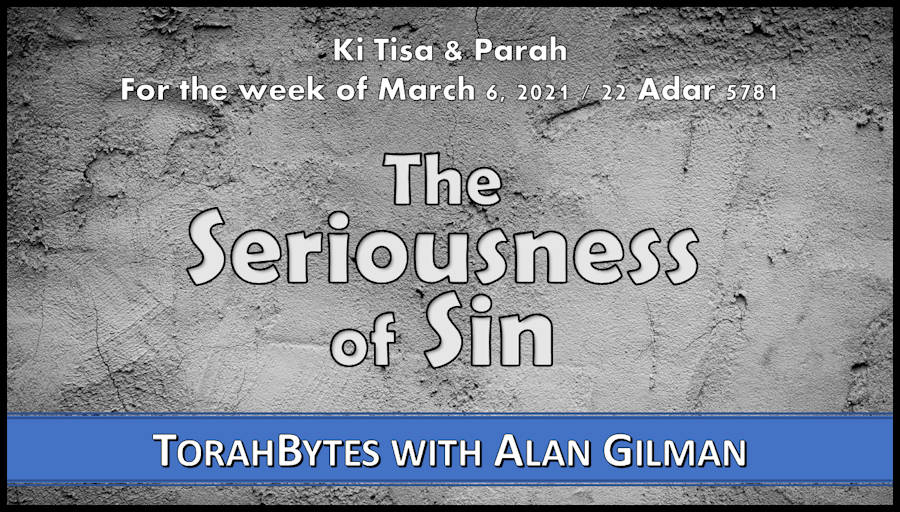 So Moses returned to the LORD and said, “Alas, this people has sinned a great sin. They have made for themselves gods of gold. But now, if you will forgive their sin—but if not, please blot me out of your book that you have written.” But the LORD said to Moses, “Whoever has sinned against me, I will blot out of my book. But now go, lead the people to the place about which I have spoken to you; behold, my angel shall go before you. Nevertheless, in the day when I visit, I will visit their sin upon them.” (Shemot/Exodus 32:31-34)

This week’s parsha (Torah reading portion) contains one of the most tragic episodes in the entire Bible. The people of Israel, having been delivered from years of slavery in Egypt, had witnessed God’s signs and wonders on their behalf. As they journeyed toward the Promised Land through barren wilderness, they camped at the same mountain upon which God had appeared to Moses in the burning bush. Moses ascended the mountain to wait upon God for what would be a comprehensive covenant – best understood as a national constitution – that he imposed upon them by right of being their rescuer.

No one expected Moses to be up the mountain for over a month (not even Moses himself). The people grew restless to the point that they wanted Moses’ brother and associate, Aaron, to provide them with some sort of tangible representation of the hitherto invisible God. That he acquiesced never fails to astound me. The man destined to become the first ever Cohen HaGadol (English: Chief Priest), fashioned a golden calf, followed by the people’s proclamation: “These are your gods, O Israel, who brought you up out of the land of Egypt!” (Shemot/Exodus 32:4). All this while God is instructing Moses in his pure, just, and holy ways. This is followed by Moses, after seeing the sin of his people, smashing the tablets of the ten commandments, followed by the slaughter of three thousand people, and a plague.

As this tragedy unfolded, Moses engaged God on two occasions with regard to God’s relationship to the people. From what I can tell, the first one, prior to Moses’ seeing the goings on, is on a national level. God had told Moses of the people’s corruption and announced to him that he would wipe them out and start afresh with a new nation derived from Moses himself. Moses’ intercedes for Israel on the basis of God’s honor, telling God that destroying the people would undermine God’s reputation in the world. God relents.

But a different type of interaction between them occurs after Moses goes down the mountain and deals with the situation. He correctly understands that the people’s actions placed them as individuals under God wrath, and so he returned to plead with God a second time. As he implores God, he offers himself in the place of the people. How noble; what a sacrifice! This time, however, God says, “No” – “Whoever has sinned against me, I will blot out of my book” (32:32).

I imagine some Christian thinkers jumping in at this point, contrasting the offers of Moses and the Messiah. What God deemed as inappropriate for Moses, he reserved for Yeshua. But this misses the point. The point is that sin can cost you your life.

Much Christian theology has a tendency to focus on sin’s relationship to eternal life to the neglect of dealing with serious moral and spiritual wrongdoing. The story at hand reminds us that being in the right group and having had genuine God experiences doesn’t get us off the hook when we sin. Yes, there is forgiveness from God on the basis of his Son’s sacrifice, but the gift of eternal life can be squandered to such an extent that we can cause great damage to ourselves and others to the point where our future life with God may be jeopardized.

I am aware of the theological technicalities that insist that the believer in Yeshua can in no way fall away from God’s favor. But let me leave you with this quote from the New Covenant book of Hebrews:

For if we go on sinning deliberately after receiving the knowledge of the truth, there no longer remains a sacrifice for sins, but a fearful expectation of judgment, and a fury of fire that will consume the adversaries. Anyone who has set aside the law of Moses dies without mercy on the evidence of two or three witnesses. How much worse punishment, do you think, will be deserved by the one who has trampled underfoot the Son of God, and has profaned the blood of the covenant by which he was sanctified, and has outraged the Spirit of grace? For we know him who said, “Vengeance is mine; I will repay.” And again, “The Lord will judge his people.” It is a fearful thing to fall into the hands of the living God (Hebrews 10:26-31).

2 thoughts on “The Seriousness of Sin”