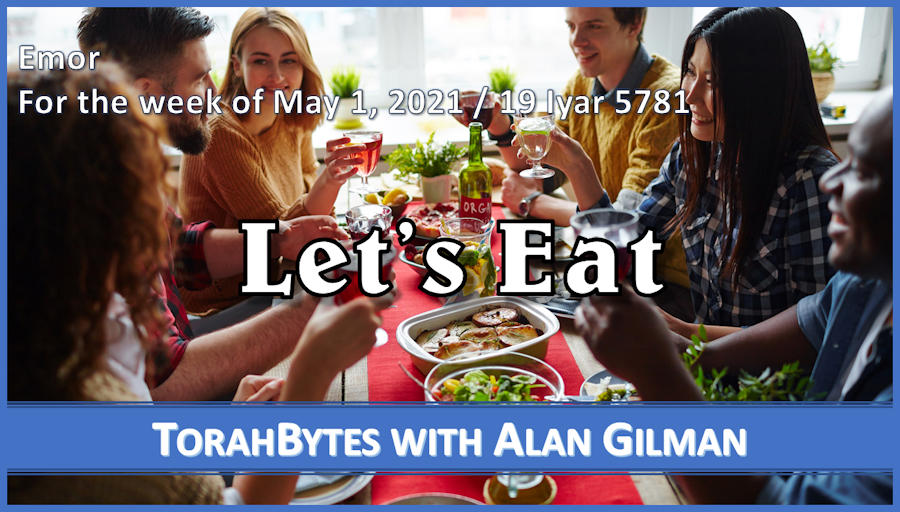 Note: I was a little hesitant to share this message due to the current health crisis. It refers to eating together and celebrating, which has been difficult, if not impossible, for some for more than a year. While the pain of separation we feel is real, I hope you will read through to the end to discover that there’s someone who longs to be with you, whom no government restriction can keep out. – Alan Gilman

And the LORD spoke to Moses, saying, “Speak to Aaron and his sons so that they abstain from the holy things of the people of Israel, which they dedicate to me, so that they do not profane my holy name: I am the Lord.” (Vayikra/Leviticus 22:1-2)

A good portion of this week’s parsha (weekly Torah selection) cautions the cohanim (English: priests) from participating in their assigned duties when deemed to be ritually unclean. There were particular prohibitions regarding their being in the presence of the dead as well as certain mourning practices. They were more limited than the general population as far as whom they could marry and the conditions under which consecrated foods were to be eaten.

It is striking how much eating played a part in the priestly service. Very few of the edible items that were offered by the people were completely consumed on the altar. Most of the offered meat, grain, and drink were either eaten by the cohanim only or by both the person making the offering and the cohanim. The dominant smell in the area of the altar must have been like a barbecue. Eating wasn’t the only thing happening, but there must have been quite a bit going on at any given time. I don’t think I am off course to say that eating was therefore a central aspect of Old Covenant worship.

Even before sin and evil had the creation in its clutches due to our first parents’ rebellion in the Garden of Eden, eating was a part of God’s good design. Just because death was not a factor until after Adam and Eve’s first sin, that doesn’t mean they didn’t need to eat. The harmony within the creation they briefly enjoyed prior to the curse included regular access to an abundance of food. Sin and the curse didn’t create the need to eat, but rather make accessing food difficult (see Bereshit/Genesis 3:17-19).

The need for food established an essential dependency of humans upon the rest of creation. It’s no wonder then that much of ancient religion is focused on relating to a god or gods in order to ensure there be sufficient food to eat. That in itself isn’t misguided, but by design. Yet there is more to food than how it drives people to seek spiritual assistance.

The personal intimacy of eating food appears also to be by design. The conditions placed upon the cohanim’s eating of the offerings were primarily due to whether or not they were fit to be in God’s presence. To eat of the offerings, they had to be ritually clean. To eat or not to eat, therefore, represented one’s ability to be in fellowship with God. While this may sound strange, it was not only in the Mishkan (English: Tabernacle) and the Temple where people ate with God. Abraham did so when three mysterious persons came to announce in advance the birth of Isaac (Bereshit/Genesis 18:1-8), and Moses and the Elders of Israel ate with him at Mt. Sinai (Shemot/Exodus 24:9-11).

It is not a random social accident that eating food is one of our primary contexts in which fellowship between people occurs. It is clear to me, if not to most, that eating alone or on the go is not best for us. Sharing the eating experience has been the basis of so much meaningful human interaction for family and friends throughout time.

In addition, it’s a meal that is the primary context of remembering God’s establishing of relationship with his people. Through the Passover, God directed Israel to year after year celebrate his victory over the tyrant, Pharaoh. It’s not just through the symbolic elements alone that the power of remembrance is conveyed, but the festive meal itself speaks of relationship with God and one another. The New Covenant version of this same meal as established by the Messiah is all this and more as Jew and Gentile together celebrate God’s victory over the greater tyrant, death. I wish more communities of believers did so as part of a large meal.

When we lose the joy of celebration, it’s easy to simply go through the motions of religious observance. Perhaps that’s what happened to the Laodiceans, a community of believers in ancient Turkey who had lost their zeal for God. Yeshua invited them to intimately engage him again: “I stand at the door and knock. If anyone hears my voice and opens the door, I will come in to him and eat with him, and he with me” (Revelation 3:20).

Unlike the ancient priests, burdened by all sorts of requirements preventing them from eating with God, Yeshua wants to walk right in and sit right down with us. He has made us fit to eat with God personally and intimately forever. Let’s eat!