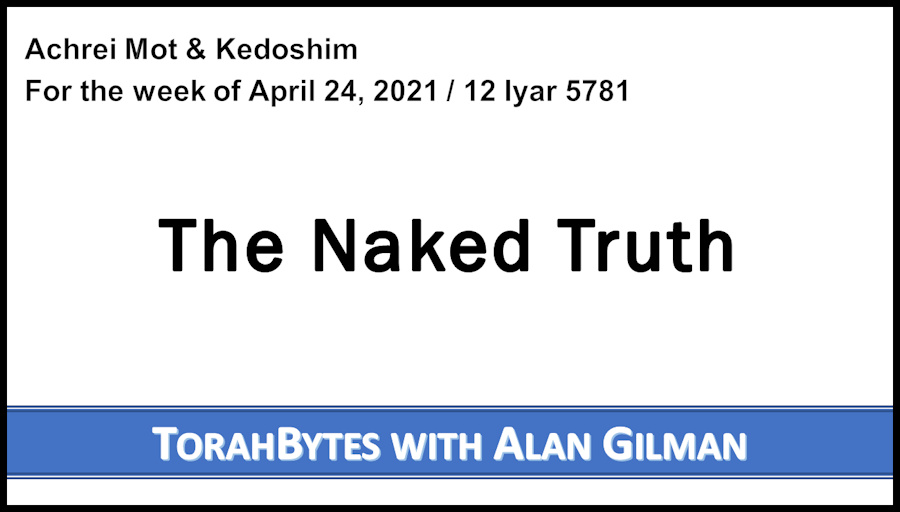 None of you shall approach any one of his close relatives to uncover nakedness. I am the LORD. (Vayikra/Leviticus 18:6)

This week’s parsha includes a detailed list of illicit sexual relationships. The Hebrew uses a special phrase to describe this, which is “don’t uncover nakedness.” Many translations treat this phrase as a euphemism. A euphemism is a figure of speech that is “the substitution of an agreeable or inoffensive expression for one that may offend or suggest something unpleasant” (https://www.merriam-webster.com/dictionary/euphemism). In English, instead of saying someone has died, we say they passed away. It means the same thing but passed away comes across as less jarring. So, instead of God’s saying through Moses, “Don’t have sex with a close relative,” it’s “don’t uncover their nakedness.” The image of removing one’s covering is apparently not as jarring as “don’t have sex.” That said, a great number of English translations of the Bible prefer to translate the euphemism into plain speech (you can view a list here).

It’s possible that the original hearers would have heard “don’t have sex” when Moses said, “don’t uncover nakedness,” just like we hear “died” for “passed away.” However, while this may not apply to all figures of speech, there may be something more going on than a simple code term, where the one expression represents the other. I wonder if our culture would use passed away if it didn’t hold to the idea of an afterlife at least historically. This is not the place for a full analysis of figures of speech, but the image created by a word picture has to somehow work within the psyche of the culture.

The scripture, especially when we are reading the very words of God as we are doing here, reflects a God inspired culture. On one hand, God through Moses is using language that the people would understand. On the other, he is instructing them on how to see the world. God didn’t have to use this phrase here. The Bible uses other terms for the sexual act. But here we read of the uncovering of nakedness. Why?

While some may be quick to connect nakedness with sex as if sex was the forbidden fruit, there is nothing in the text to suggest that. Sexuality within marriage was already blessed by God (see Bereshit/Genesis 1:28) and would continue to be so. Instead, there is something else going on here. And it’s something very difficult for most people to comprehend today.

For most people the body is nothing more than an accident of nature. The real person is entrapped in a material cage that encumbers a full and free expression of who we really are. This way of thinking is extremely common among adherents of the Bible. But according to Scripture our bodies are God-given vehicles through which to honor God and bless others. The challenges we face are not due to our physicality but due to sin. Our bodies will be fully redeemed upon Messiah’s return.

The uncovering of nakedness, then, is not simply about “having sex” with someone. That’s because sexual intimacy is not simply a physical transaction between humans. The exposing of our bodies to others is an exposing of self in our most vulnerable state. You and I were not made to expose our deepest selves to just anyone. God designed physical intimacy of this sort to be reserved within a protected exclusive relationship. To share ourselves outside of God-sanctioned marriage tears at the very fabric of what it is to be human. The results are disastrous for both individuals and society.

Beyond the prohibitions listed, we would do well to regard our bodies as God does, as vessels set apart for his service in every area of life.