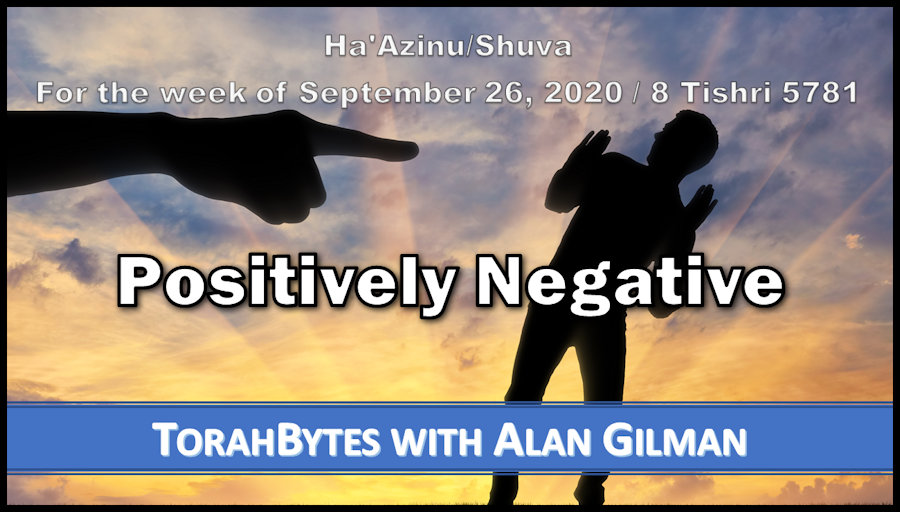 If they were wise, they would understand this; they would discern their latter end! (D’varim/Deuteronomy 32:29)

The annual Torah reading cycle comes to an end during the High Holiday season. Whenever a festival falls on Shabbat, a special Torah reading replaces the regularly scheduled ones. This year that happens quite a bit; this week being the one exception. It is also unusually negative.

We live in unusually negative times. I am not referring to the general intensity of the current challenges we are facing, including the pandemic and various political and social issues. It’s the loud angry tone of accusation being incessantly fired at real or perceived wrongs, be they current or past, systemic or not. Somehow it has become acceptable to harshly and angrily criticize those with whom we disagree and blast those deemed to be the source of injustice.

I in no way want to suggest that the concerns being addressed are necessarily unjustified. Perhaps some are. I personally believe that we should do our best to listen to the complaints of others. I know it’s difficult to hear the content of what someone is saying when they are very angry. But just because their presentation is upsetting and extreme shouldn’t mean they should be automatically disregarded.

That said, I also believe there is an underlying misnomer about life in general that is fueling the anger. Perhaps if the victims of injustice and their supporters would take a moment to catch some of what is being addressed by Moses in this week’s reading, we all might have a better chance at resolving many, if not all, the issues we are facing today.

These are some of Moses’ final words to the people of Israel before he died, thus the Torah is near completion. The Books of Moses are foundational to the whole Bible and contain core stories such as creation, human rebellion, and the early beginnings of God’s restoration plan. It’s in Torah we learn of God’s choosing of Israel and the demonstration of his power through the exodus from Egypt, followed by the revelation of his word at Mt. Sinai and subsequent teaching through Moses. Throughout Torah’s pages we discover God’s worldview and the delineation of his ways as they touch on all aspects of life. Yet, as Moses completes his mission, his outlook is bleak. Instead of the expected, “You can do it!” pep talk, he tells his people, “You are going to fail!”

His words may be negative but are designed for a positive result. Moses isn’t trying to discourage the people; he is helping them to take a realistic view of themselves. They have a problem, a deep-seated spiritual and moral problem. Essential to understanding this problem is to accept that they all have it. It may sound as if Moses considers himself an exception, but remember he had been recently barred from entering the Promised Land due to his own misbehavior. No one is exempt from this negative assessment.

The good words of Torah, while being an overall blessing, testify against Israel by exposing the negative condition of human nature. This is not exclusive to Israel, of course. For Israel was chosen partly to demonstrate to the whole world our twisted state. This is what the Bible calls, “sin.” In the subsequent years Israel would face their sin as God would teach them (and through them the world), that only he possesses the remedy. It’s only by humbly admitting our need and receiving God’s forgiveness and power through the Messiah that we can be the people we were meant to be.

The current rage has failed to grasp that we are all in this together. No one can claim to be in possession of a nature that is morally and spiritually superior to anyone else’s. Sin may express itself differently in and through each one of us, but it will express itself. Thankfully, the remedy too is available to anyone willing to receive it.