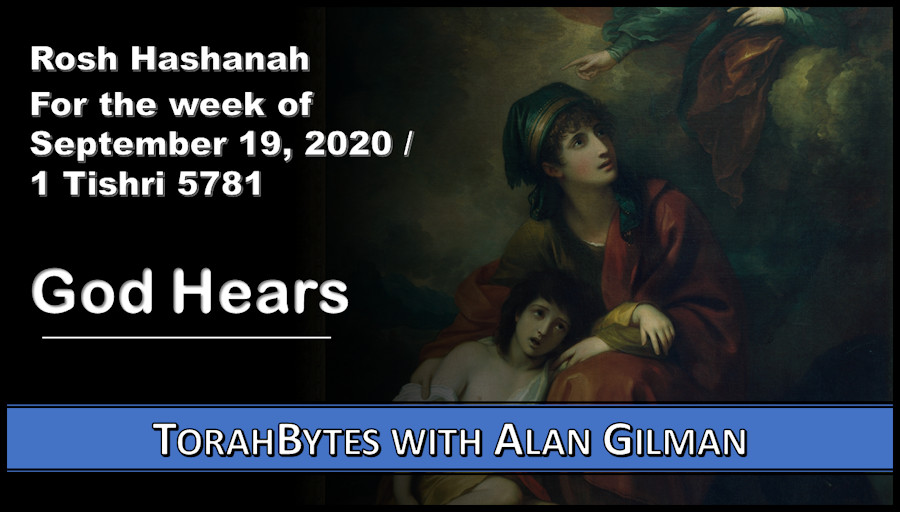 This week’s Torah readings are special for Rosh Hashana, which literally means “head of the year.” A more biblical term for this festival is Yom T’ruah, meaning “Day of Blowing (the Shofar),” which over time became the occasion to mark the civil new year for the Jewish people. When major festivals fall on a Shabbat, the normally scheduled reading is postponed and replaced by special readings pertinent to the festival. Rosh Hashanah, being observed for two days (this year beginning the evening of Friday, September 18), there are different readings for each day.

The first Torah reading for Rosh Hashanah includes the birth of Isaac, the son promised to Abraham and Sarah in their old age. This section of Bereshit/Genesis was likely chosen because it is acting as an introduction to the second reading later in the same book, when God provides a ram to be sacrificed in place of Isaac. The connection to the festival is due to the ram’s being caught by its horns in a thicket, and that the ram’s horn, shofar in Hebrew, is the central symbol of the festival.

The first reading also includes the account of Hagar’s and Ishmael’s final separation from Abraham’s household. Ishmael was the product of a surrogacy arrangement urged by Sarah as a way to resolve her barrenness. This was the second time that an issue between Sarah and her maidservant, Hagar, led to Hagar’s leaving. The first time Hagar was instructed by God to return (see Bereshit/Genesis 16), but this second time the separation was to be permanent. The first time, when she was still pregnant, she was told by an angel that she would bear a son, named Ishmael, and that God would give him many offspring. This second time, she is told he would become a great nation.

This one sentence to this one person tells us something about the God of Israel that is too often forgotten. From this earliest stage in the development of the Chosen People, Torah makes clear that the God of Israel isn’t the God of Israel only. The ears of God are open to all. This is not to say that every representation of the spiritual domain humans have invented is correct. Neither does this justify misguided actions of those who claim to be true believers. The Bible in no way condones an anything-goes approach to God and life. But it also doesn’t condone any attempt to claim exclusive rights to him.

The chosenness of Israel was established by God to bless the nations of the world (see Bereshit/Genesis 12:3). Israel was chosen as a means to an end, not an end in and of itself. Without in anyway downplaying God’s eternal commitment to the descendants of Abraham, Isaac, and Jacob, chosenness was never to result in an exclusive claim on God.

It took the early followers of the Messiah some time to grasp this. A breakthrough in this regard happened when Peter was called by God to be the first to present the good news of the Messiah to a non-Jewish household. He said, “Truly I understand that God shows no partiality, but in every nation anyone who fears him and does what is right is acceptable to him” (Acts 10:34-35). He didn’t understand that before. He should have, but he didn’t. Now he did.

I assume that many reading or hearing this at least theoretically understand that “God shows no partiality,” but do we really? While good definitions of appropriate faith are essential to walking in God’s truth, I wonder how many unnecessary boundaries we have placed on our particular brand. It’s one thing to cluster with like-minded people, but there is a fine line between preference and arrogance. If God is willing to hear people from outside our strictly defined groupings, then perhaps we are well advised to hear them too.

One thought on “God Hears”