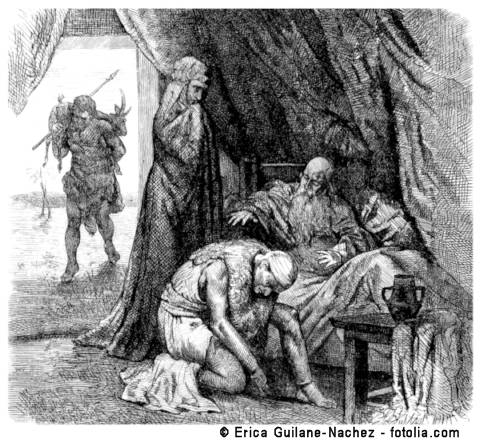 Then Jacob made a vow, saying, “If God will be with me and will keep me in this way that I go, and will give me bread to eat and clothing to wear, so that I come again to my father’s house in peace, then the LORD shall be my God, and this stone, which I have set up for a pillar, shall be God’s house. And of all that you give me I will give a full tenth to you.” (Bereshit/Genesis 28:20-22)

From before he was born, Abraham’s grandson and Isaac’s son Jacob was a fighter, constantly contending with others, wheeling and dealing in order to get the upper hand. One day he would even wrestle with God and to some extent win, but that’ll have to wait until next week. He was a driven man, who knew (or at least thought he knew) what he wanted and strove to attain it at all costs. The ironic thing about Jacob is that God had already determined that he would receive many of the things he strove for, but that didn’t create a laid-back, passive, “whatever” approach to life. Instead he was willing to outsmart, trick, and deceive even his closest family members to get his way.

But why is that? Was he oblivious to God’s plan for his life? We know that his mother knew about his destiny, because God had told her (Bereshit/Genesis 25:22-23), It’s possible that she kept that to herself even though her role in Jacob’s deceiving his father for the blessing may have been fueled by this knowledge. But whether or not he knew of God’s promise from an early age, God himself made it clear to him in a dream as he was running away from his brother Esau (Bereshit/Genesis 28:10-17). Yet the awareness of God’s promises didn’t alter his approach to life. The bulk of this week’s Torah portion deals with his wrangling with his uncle Laban. God prospers Jacob nonetheless, but through it all, Jacob fights for everything he gets.

Do you know anyone like Jacob? Born to greatness – people who do well at whatever they put their hand to, but seem to think that their success is completely dependent on themselves? On one hand they are likeable and helpful. They are winners after all. Who wouldn’t want them on their team? They tend to make others look good. However, they are always fighting, struggling, vying to get their way. They seem to always be selling something, while they relate to others, even their friends, as opponents. They don’t think anyone really understands them and the world would be a better place if everyone would simply listen to them. Because of their great abilities, much good comes from their efforts, but they can sure be tiring to be around.

Why is that? Those who are of the normal cantankerous sort just cause trouble. It’s better to avoid those kinds of folks. But not the Jacobs. The blessing and favor of God is upon them. But it’s as if they don’t know it. And that is exactly what their problem is. They live with some sense of God’s call and presence in their lives, but at the same time, the reality of that has not fully taken over their hearts.

When God appeared to Jacob as he ran away from home, he didn’t completely deny that God spoke to him in his dream. That’s what the true atheist or agnostic might have done. But in Jacob’s case he acknowledged God’s existence and that he had actually spoken to him. Yet he couldn’t accept God’s promise to him. The way he strove after his father’s blessing, he must have had an understanding of its value, but he wouldn’t or couldn’t trust that God had already determined to give it to him and/or had the ability to do so. Therefore he lived as if his success was totally dependent upon himself.

His failure to grasp the reality of the situation didn’t change the fact that God’s promises to him were unconditional. Jacob may have thought he was such a good fighter, smarter and stronger than his perceived opponents, when all along it was God working in and through him and his circumstances to bring about his will in Jacob’s life.

His eventual wrestling match with God would change all that. But until that happened, think of all the wasted and misguided energy and action on his part, resulting in so much anxiety and unnecessary strife. It was Jacob against the world, when all along God was guiding him and prospering him. Of course, we will never know what it would have been like had Jacob trusted God from the beginning or at any other time before God finally had his way. It’s too late for him. But it’s not too late for the Jacobs of today. Why wait until you (if you are a Jacob) are at the end of your rope to get this message. If you are in covenant relationship with God through the Messiah, you can relax. Knowing God’s favor is upon you doesn’t mean you don’t have to work hard or you won’t face trouble. It’s that you will no longer see everyone around you as an opponent to overcome. Instead you can serve God and others, knowing that God will indeed have his way in and through you.

2 thoughts on “Are You Jacob?”