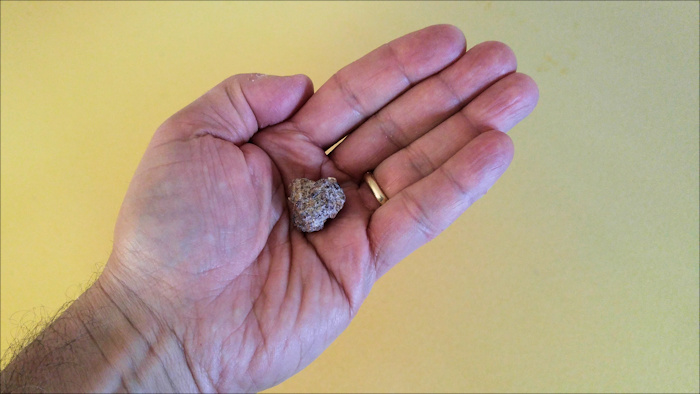 A sample of frankincense I was given recently.

The LORD said to Moses, “Take sweet spices, stacte, and onycha, and galbanum, sweet spices with pure frankincense (of each shall there be an equal part), and make an incense blended as by the perfumer, seasoned with salt, pure and holy.”  (Shemot/Exodus 30:34-35)

The other day someone gave me a piece of frankincense. I’d never seen one before. I had no clue what it looked like, felt like, or smelled like. You might be an expert in aromatic resins, but I didn’t know frankincense was an aromatic resin let alone know what an aromatic resin is. But like most, if not all, of you, I have heard of frankincense. It was one of the three gifts the Magi brought to Yeshua shortly after his birth. It’s found throughout the Hebrew Scriptures. It’s first occurrence is in the passage I just quoted from the Torah. The Hebrew is l’vonah, derived from the word for white, which is apparently its color in its purest form.

When the frankincense was put in my hand, something special happened to me. As I looked at it, felt it, and smelled it, the vague and uninformed concept of frankincense became real to me. It was no longer an element in a story, albeit a true story, but a story nevertheless. It was now an object that existed in the real world – not just in my mind. In that moment, that which the Magi offered to the Lord was in my hand. A connection immediately formed between me and a two-thousand-year-old event. Even though I already believed the event, the actuality of it came rushing at me, all because I encountered a small sample.

This is similar to what I went through repeatedly when visiting Israel. I’ve read the stories over and over again. I’ve seen countless photos, but being there was something else. Standing on the shores of Lake Kinneret (Sea of Galilee), overlooking the mountains and the valleys, being in the Judean wilderness, seeing the caves in which David hid from King Saul, beholding the Temple Mount, everything I had read and heard came into full texture and contour.

I don’t doubt the Bible stories. After all my years of grappling with Scripture, I have learned to give the Bible the benefit of the doubt. I have wondered at times why some people are so excited about discovering the remains of Noah’s Ark, for example. I know it happened. I have no need for it to be discovered. That said, archeological digs are fascinating. I loved seeing the excavation at Shiloh, where they are hoping to find some tangible evidences of the Mishkan (English: the Tabernacle). I think that would be amazing, but not because I need its existence proven to me. And yet, being there and meeting the people involved in the project was a similar experience to the frankincense.

I think I know what is so impactful about the frankincense. It’s real. I knew it was real before it was in my hand. Yet it’s existence in the real world was never truly established in my life personally. Now it is. No longer will frankincense be simply a concept. From now on, whenever I read about it, I will experience the actual object all over again. Its significance in Scripture will be enhanced by the actual object and the object will be understood through the lens of Scripture.

Experience is the connector that takes a concept and allows us to encounter it as a real thing in the real world. It exists in reality apart from our experiencing it, but its reality means little to us until we genuinely experience it for ourselves. People of faith can easily miss this. They may even resist it. For many, the primacy of faith suggests that the most important things of life are intangible items that exist in the unseen spiritual world only. Since our senses easily misguide us, faith is often leveraged to deny the real world of things. It is true that our senses can misguide us, that God’s truth through his Word is the only reliable interpretive key for life. But that doesn’t mean we live disconnected from the world around us. On the contrary. Biblical faith enables us to experience the reality of life God’s way.

If the Bible is true, then we should see evidence of that on an ongoing basis. There are real things that cannot be seen or perceived by our physical senses, such as God himself or essential events of the past (the giving of Torah, the resurrection of Yeshua, etc.). At the same time, since God is real and these events really happened, then they should affect our lives and the world in which we live in tangible ways. Whether it’s an answer to prayer, personal transformation or a piece of frankincense in my hand, we should expect to experience those things to which the Bible attests. Really.

TorahBytes returns on Friday, February 22, 2019 at 12:15 p.m. Eastern Time. Alan will follow up this week’s message with a more in-depth discussion on how experience is the bridge between concept and reality. Recorded version will be available immediately following.