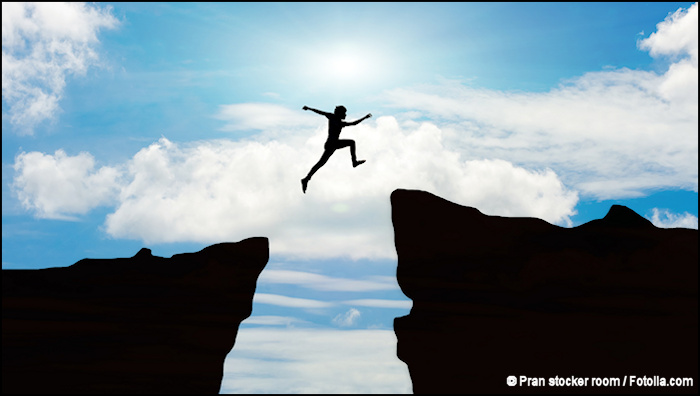 Be strong and courageous. Do not fear or be in dread of them, for it is the LORD your God who goes with you. He will not leave you or forsake you. (D’varim/Deuteronomy 31:6)

My coming to know God through Yeshua the Messiah just over forty-two years ago completely transformed my life. A few months before my nineteenth birthday, I started having panic attacks. They abated over much of the summer but came back with a vengeance as September approached. I had no interest in spiritual things and so was being nothing more than polite when I started up a conversation with the first Jewish follower of Yeshua I had ever met. Over the course of an hour and a half I encountered the prophecies about the Messiah in the Jewish Bible (Old Testament), learned about the significance of sin, discovered my need to repent, and was invited to ask Yeshua into my heart and life. While I had a strange sense that something significant was happening, it wasn’t until the following evening that I realized I had experienced a miracle, having not had a panic attack for an entire day. For months I was on cloud nine.

The emotional high didn’t last, however, as the specters of my past returned. Until recently I understood this to be God at work, calling me to deal with unresolved issues. The extreme positive nature of my early days in the Messiah was due to its being new, I thought. However difficult my life seemed to be as a youth, that was nothing compared to the challenges of adulthood with marriage, children, work, and so on. That I began with a honeymoon period is wonderful. But it takes a certain level of maturity to accept that God wasn’t as real in my life as I thought he was. The last thing I want is to live in a fantasy of spiritual deception.

A few months ago, I was challenged to rethink this. Not that deception is okay, but perhaps I misinterpreted the loss of joy and excitement I had at the beginning. Instead of my issues being the kind of reasonable pain that comes from facing personal weakness, might it be that I responded to the challenges of adulthood by reverting to the ungodly habits of my youth? Perhaps my struggles were not due to my need to be honest about my deficiencies, but rather because I had become distracted from the power and goodness of God.

`Don’t get me wrong, we need to honestly deal with our deficiencies, what the Bible calls “sin” – all the ways we think and live that are not in keeping with God’s standards. But that’s the point. It’s one thing to be honest about sins’ remnants in our lives, it’s another to allow them to continue to control us.

Even though I have no doubt my miracle was real, there was something about it that I now believe I misinterpreted. I had been an anxious and hopeless mess until God burst into my life. From my perspective, I was like the people of Israel in bondage in Egypt. In my case the bondage was emotional, but no less oppressive. I was trapped until God rescued me. Where I went wrong, I think, is that I have interpreted the vestiges of emotional bondage through the lens of my earlier victimhood. Just as I couldn’t do anything about it until God showed up, I expected I needed to wait for him to come through time and time again. Until then, there wasn’t anything I could do about it. That’s what’s called a victim mentality.

It was a victim mentality that prevented the generation that left Egypt from confidently entering the Promised Land. Even though God miraculously rescued them and demonstrated his love and power to them over and over again, they couldn’t trust him enough to face the later challenges of acquiring their inheritance.

Now as the second generation had the same opportunity, they were called to be “strong and courageous.” God was not going to simply wipe out their enemies and transport his people into Canaan. They themselves had to do it. It’s not as if they were on their own, of course. God would be with them. God guaranteed victory. But they still had to fight. In order to fight and win, they had to trust God. Trusting God means not giving in to fear. To do that requires no longer thinking like a victim. It means to purposely turn from fear and actively trust God, instead of waiting for him to take the fear away.

There are times, such as my introduction to Yeshua, where God overwhelms us with his miraculous power, doing for us what we in no way can do for ourselves. But these miracles are not designed to create passive misguided overdependence on God in the name of faith. Rather they are to equip us to be “strong and courageous,” trusting him to confidently fulfill the exploits to which he calls us. How many times are we waiting for a miracle when what God really wants is for us to be the miracle?

Are you ready to be a miracle? Find out how on TorahBytes Live, scheduled for Thursday, September 13, 2018 at 11:30 a.m. Eastern Time. Recorded version will be available immediately following:

2 thoughts on “Be the Miracle”