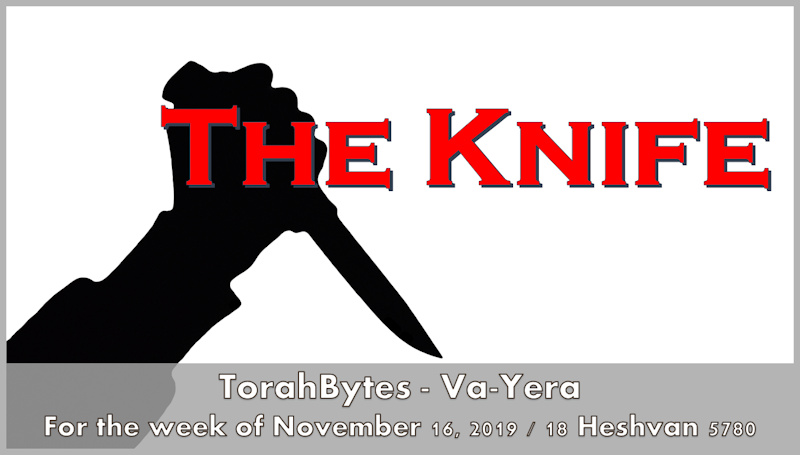 When they came to the place of which God had told him, Abraham built the altar there and laid the wood in order and bound Isaac his son and laid him on the altar, on top of the wood. Then Abraham reached out his hand and took the knife to slaughter his son. (Bereshit/Genesis 22:9-10)

Could you imagine Isaac telling this story from his childhood to own his sons, Jacob and Esau. “Hey boys, did I ever tell you about the time God told my dad to offer me as a sacrifice?” to which Esau laughs and blurts: “You gotta be kidding, Dad. You make up the craziest stories.” Jacob, trying to appear overly intellectual, gives his brother a knowing look, and says: “Undoubtedly father is speaking in exaggerated metaphorical terms.” Isaac shakes his head. “No, my sons. The journey we took to Mount Moriah was so strange. We walked for days accompanied by a few of my father’s most trusted servants. He had said something about making an offering to his God. We didn’t take any animals with us to sacrifice, so I figured he would trade for a sheep or a goat from a herdsman along the way. But when we arrived at the foot of the mountain, still with no animal, he told the servants that they should stay there while he continued on with me to worship God. We carried fire, wood, and a knife up to the top. By that time, I couldn’t keep my thoughts to myself any longer. I asked him where the animal for the offering was. He looked off in the distance while saying, ‘God will provide for himself the lamb for a burnt offering, my son.’ This was getting really weird. To this day, I can’t tell you why I let him, but he tied me down to the wood –” Seeing the terror in his sons’ eyes, Isaac interrupted himself – “Obviously he didn’t do it.” Their tension eased slightly. Isaac had a hard time trying to convey what happened next. It seemed like forever before he was able to get the words out. “He didn’t do it, but when I saw the knife in my father’s hand hanging over me, I was completely frozen. It was as if time stood still. Then God spoke. At least that’s what my father said; I thought I heard something, but I couldn’t make it out. Perhaps I was too scared. Dad dropped the knife and began to untie me. He then went off to some shrubs nearby, where a ram had gotten his horns caught in some thorns. I don’t know how it got there or why we hadn’t seen it till then. Dad said that he was to offer the ram in my place. He and I never talked about it after that.”

If you know the stories of Jacob and Esau, you would know that each of them in their own way had serious issues with their father’s and grandfather’s faith. From what we can tell, Esau never showed interest in God at all, while Jacob really struggled. When God spoke blessing and promise to him as he was running away from Esau, Jacob’s response was tentative. I can’t say for sure that it was Isaac’s experience on Mt. Moriah that turned his sons off from God, but I wouldn’t be surprised if it played a major part.

I share these dramatic speculations to emphasize that there is nothing sentimental about encountering the true God. Too often stories like this are glossed over, distracting people from their troubling details. To be comforted by this story’s resolve is one thing, but to miss its distress is to miss a core aspect. God’s involvement in our lives can really mess us up at times. He has no issue upsetting our routines, challenging the status quo, or forcing us to face our dysfunctions in spite of how uncomfortable that may be.

Readers of the New Testament tend to delight in the commentary to this story from the book of Hebrews, where we read that Abraham thought that God would raise Isaac from the dead if need be (Hebrews 11:17-19). This means he was indeed willing to kill his own son. Some may take this to be a great act of faith, which it is, but at what cost to his son? “My dad trusted God so much that he was willing to kill me?” Oh my!

But isn’t Isaac’s submission to his father a beautiful and moving picture of what Messiah actually did for us? Messiah did submit to an untimely, unjust death on our behalf, but beautiful and moving? Really? Yeshua submitted to depths of evil that you and I can hardly conceive of. He was willing to take head on the fulness of sin’s consequences that we might have eternal life. The results of his death are beyond wonderful, worthy of our unending gratitude, but the process certainly wasn’t nice.

As we walk with God, we, like Isaac, may be intimidated – even traumatized – by the threat of death. Until the final judgment God’s people will be continually threatened by the brutality of sin’s effects on the creation. That’s why it is so crucial to remember the knife hanging over us will not have the final word. Yeshua’s conquest over death, typified by Isaac, should encourage us to face the evil in our own day with confidence and hope in spite of the trauma.

One thought on “The Knife”