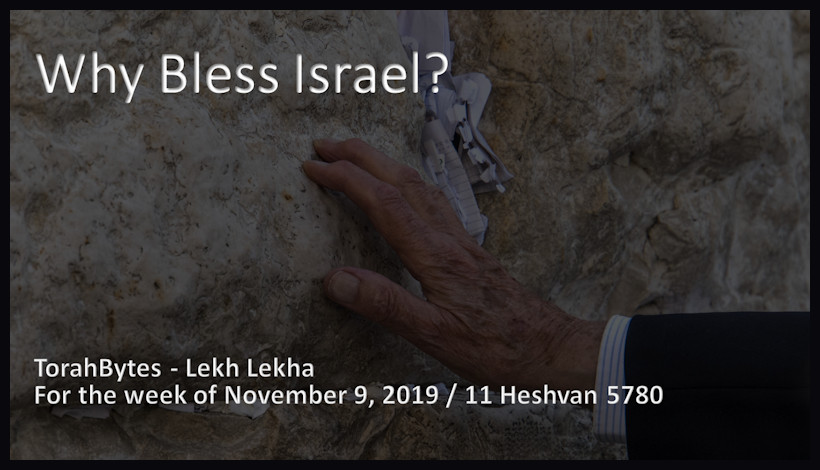 I will bless those who bless you, and him who dishonors you I will curse, and in you all the families of the earth shall be blessed. (Bereshit/Genesis 12:3)

A couple of weeks ago, I made the statement “there is only reality.” Whatever God made is what is. Everything else is false. One reader took me to task with regard to humanly made things from cartoon characters to clothing. Obviously, my brief treatment of the subject wasn’t sufficient. My point, however, was that we live within a created universe that is what it is because God created it that way.

Another aspect of the real world in which we live is that God determined to restore his creation from the effects of our first parents’ misguided journey toward evil. When he spoke judgement upon the Tempter, he said: “I will put enmity between you and the woman, and between your offspring and her offspring; he shall bruise your head, and you shall bruise his heel” (Bereshit/Genesis 3:15). The initial stages of the outworking of his creation rescue plan is found in this week’s parsha.

It all started with one man in what we now call the Middle East. Abram, whose name God later changed to Abraham was married to a woman named Sarai, whose name God later changed to Sarah. God spoke to Abram in his homeland of Ur in modern day Iraq, telling him to go to what would become the land of Israel. This land is key to not only Abram’s story but to the story of creation itself, since its restoration would come into full focus there.

God told Abram that he would make him a great nation. We don’t know how old he was when he was first given this promise. By the time we pick up his story he and Sarai are already getting on in years. He would be almost a hundred and she ninety before they would realize the full intent of God’s will for their lives in giving them a baby boy, Isaac. God’s plan was to develop through them a special nation which would bring blessing to the whole world.

The story of Scripture is the story of Israel. It was to this nation that God would reveal himself and his ways, and eventually through them to the world. Some may find it difficult to accept that God chose one nation through which to bless all nations. We often want God to reflect our version of fairness by relating to all individuals at all time and places in the exact same way. Meaningful differences within the creation have existed from the beginning. God created a diverse universe. Even the original design of human beings included role differentiation.

Note that Israel’s particular greatness was not for themselves, but for the stated purpose of bringing blessing to the whole world. This is in keeping with the statement made by Israel’s greatest offspring, when he said, “But whoever would be great among you must be your servant” (Matthew 20:26). The essence of true greatness within the real world is found in service. That Israel would struggle to fully realize its calling of its service to the nations takes nothing away from God’s purposes for his chosen ones.

Israel’s struggle may have been the very reason for God’s commitment to them as expressed by his promise quoted at the beginning: “I will bless those who bless you, and him who dishonors you I will curse.” It is in the world’s best interests that God would have Israel’s back for his rescue plan, since the whole creation depends on them. Note that I didn’t say “depended,” because we haven’t yet seen the culmination of God’s purposes yet, the fulness of which is yet to come (see Romans 11:15).

Tragically too many people are caught up more with media depictions of Israel than the reality as established by God. Too many Christians forget, ignore, or misinterpret Paul’s teaching on God’s unending faithfulness to Israel (see Romans 11). That the Jewish people around the world or those living in the State of Israel today don’t meet God’s standards is nothing less than an expression of the humanity that we (I am Jewish myself) share with the world. Our ongoing existence and being a blessing to the world is rightly understood as God’s ongoing faithfulness to Abram. Those who honor Israel’s Messiah would do well to honor his kinsmen through whom God’s blessing has and will come.