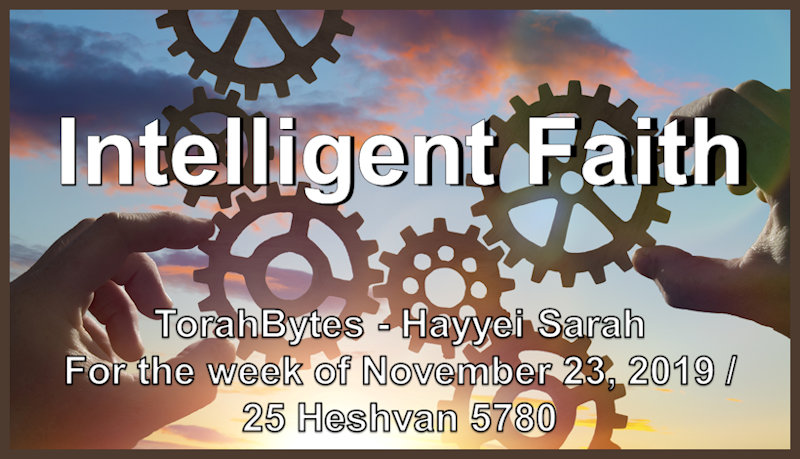 This week’s parsha (Torah reading portion) provides a look-see into trading customs of ancient Canaan many hundreds of years before Joshua and the people of Israel acquired it. Sarah, Abraham’s wife, had died, and needed a place for burial. We can assume that others among Abraham’s entourage would have passed away beforehand, but only now do we read of a need to purchase property for this purpose. It could be that public burial grounds were appropriate for Abraham’s servants, but not for his own family. The cave of Machpelah was suitable for more than just Sarah. Abraham himself, plus Isaac and his wife Rebecca, as well as Jacob and his wife Leah were eventually buried there.

When Abraham inquired after this piece of property, its owner offered the cave as a burial place at no charge. Yet Abraham insisted upon paying for not only the cave but the field it was part of. Clearly Abraham had the foresight to secure a family burial place that could be still used after Sarah’s death. But there may have been something else going on. Abraham’s need to bury his wife set up a situation whereby his family would have a claim, albeit small, upon the land. God had promised Canaan to his descendants, but as of yet, Abraham had made no acquisition of any portion whatsoever. Sarah’s death provided such an opportunity.

This wise move on Abraham’s part forever established his and his family’s presence in what would become a most contentious region of the world. Perhaps all he wanted was a family burial plot. Regardless, his thinking beyond the immediate need he faced for his wife resulted in a legal foundation to retain the Promised Land through innumerable challenges in the subsequent centuries.

People of faith may tend to downplay human strategy in the fulfilment of God’s purposes. We might assume that the more detached we are from practicalities and human effort, the better. Certainly God has accomplished amazing things through extraordinary happenings. Yet, the extraordinary often works in concert with the ordinary. The person of faith understands that reliance upon God, his guidance and power, is absolutely essential to a legitimate and meaningful relationship with him. But reliance upon God doesn’t negate appropriately using the vast array of tools God has given us to live effective godly lives. One of those tools is intelligence.

Intelligence is the utilization of thought to effectively engage the world around us. It requires an awareness of one’s environment, an understanding of how life works (both in the general and the specific), and the ability to interact with others in order to achieve a desired result. As a tool, intelligence can be used for good or evil. For the person of faith, loyalty to God and his ways is first and foremost the platform upon which life is to be lived. But to live an effective godly life is more than possessing moral fiber and basic spirituality; it also demands well-informed smarts.

Too often we accept the false premise that understanding the world in which we live undermines faith. Disciplines such as science are only problematic not when they inform us too much, but not enough. True intelligence is able to take supposed discoveries and understand how best to integrate them within the world we live. True intelligence accepts that we live in a complex world and requires patience and insight such as with Abraham here.

We shouldn’t be afraid to think, to ponder, to plan, to strategize. God has given his human creatures the gift of intelligence as a key tool to engage the world he made. True faith is an intelligent faith; one that effectively and successfully engages life to further God’s purposes.