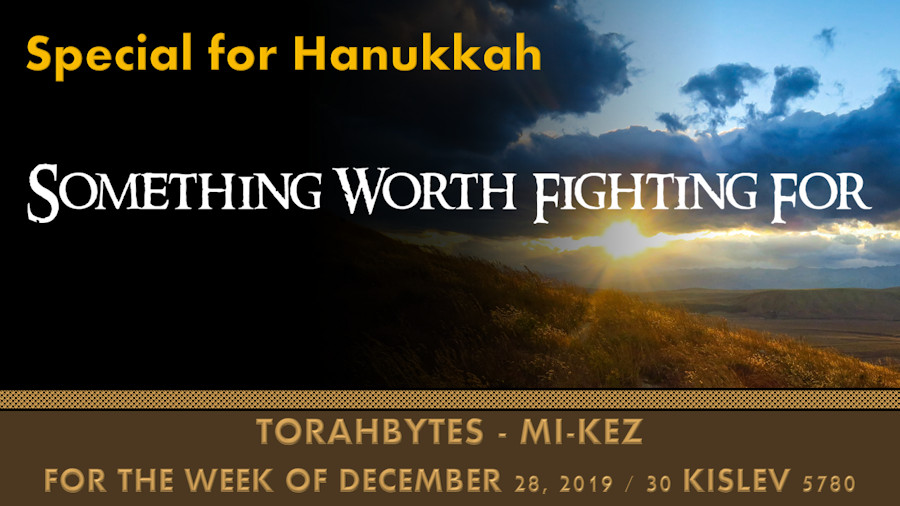 My favorite movie clip for Hanukkah is from Lord of the Rings. Frodo, the unlikely hero of this popular epic is becoming more and more overwhelmed by the evil power of the ring he is seeking to destroy. At this point he is about to be captured or killed by one of the Dark Lord’s emissaries, thus bringing his quest to a most disastrous end. At the last moment Frodo’s loyal companion, Sam, rescues him. But Frodo, having temporarily lost his senses, is ready to stab his friend. Here is the ensuing dialogue (I highly suggest listening to the audio version, which includes the clip from the film):

Sam: I know. It’s all wrong. By rights we shouldn’t even be here. But we are. It’s like in the great stories, Mr. Frodo; the ones that really mattered. Full of darkness and danger, they were. And sometimes you didn’t want to know the end… because how could the end be happy? How could the world go back to the way it was, when so much bad had happened? But in the end, it’s only a passing thing, this shadow. Even darkness must pass. A new day will come. And when the sun shines, it will shine out the clearer. Those were the stories that stayed with you, that meant something, even if you were too small to understand why. But I think, Mr. Frodo, I do understand. I know now. Folk in those stories had lots of chances of turning back, only they didn’t. They kept going. Because they were holding on to something.

Frodo: What are we holding on to, Sam?

Sam: That there’s some good in this world, Mr. Frodo. And it’s worth fighting for.

“There is some good in the world…and it’s worth fighting for.” What a noble statement. But as I was getting ready to repost this for Hanukkah, I realized that there is an assumption behind Sam’s words. In order for there to be a good worth fighting for, there needs to be such a thing as good.

Good, as Sam understands it, is not about our side versus their side. Sam’s statement isn’t one of staying true to their team or their cause. The undergirding worldview of this humble character (in the mind of the author, of course) is there is such a thing as objective good and objective evil.

What is obvious in Lord of the Rings is quite fuzzy in our day. Many doubt that such objectivity exists while others who may suspect it does resist making any conclusive determinations about it. Good has become a matter of personal preference.

This version of good is actually an expression of the lure of the misguided influence that Tolkien exposes in his popular trilogy. Self, self-seeking, tribal loyalty for its own sake, blind commitment to ideology, groupthink, are all forms of the Shadow, the evil influence overtaking the world of Middle Earth in Lord of the Rings and overtaking our world today.

Thankfully, there is objective good, because the good and only God created the universe. Good isn’t good simply because God says so, but rather because he designed it that way.

The Maccabees were not fighting for a personal cause. They, as many were doing in their day, could have easily gone along with the crowd, keeping with the times in which they lived, one of progress and tolerance. But the Maccabees knew what was at stake—God’s plan for Israel—that would eventually culminate with the restoration of the entire creation—was in jeopardy and they were not going to just let it happen. Instead they knew that, in spite of the increasing shadow overtaking Israel, they would resist; they would fight. With God’s help, they won the miraculous victory we commemorate this week.

What was true for the Maccabees is no less true for us today: there is good in the world and it’s worth fighting for!

One thought on “Something Worth Fighting For”