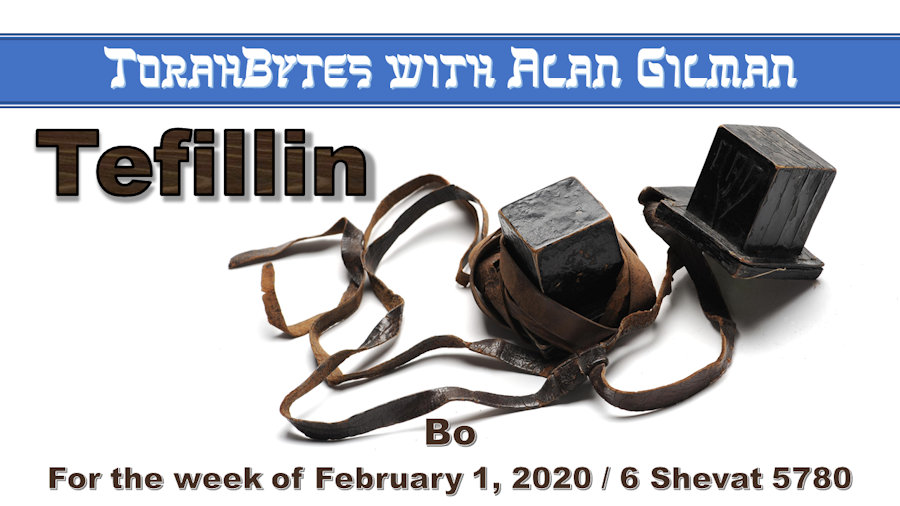 And it shall be to you as a sign on your hand and as a memorial between your eyes, that the law of the LORD may be in your mouth. For with a strong hand the LORD has brought you out of Egypt. (Shemot/Exodus 13:9)

This week’s parsha (Torah reading portion) contains two of the four references in the Torah to what has been taken to be the basis of tefillin. Tefillin are the pair of black boxes attached to leather straps that are worn during certain prayers. The verses are the one quoted above, Shemot/Exodus 13:9, as well as 16, D’varim/Deuteronomy 6:8 and 11:18. The boxes contain hand-written parchment scrolls of the passages within which these verses appear (Shemot/Exodus 13:1-10, 13:11-16; D’varim/Deuteronomy 6:4-9, 11:12-21).

Using tefillin has become a mark of strong adherence to Judaism. Its use is ancient. How ancient, we don’t know. You might be surprised to learn that the oldest recorded mention of tefillin is in the New Covenant Writings (the New Testament), Matthew chapter twenty-three, verse five, where Yeshua is quoted as saying, “they make their phylacteries broad and their fringes long.” Not very complimentary, as the Messiah is critiquing the general showiness of the religious leadership of his day. The casual reader may miss, however, the full impact of Yeshua’s critique here. For the most part, his comments focus on how these people made their religious objects in such a way to draw attention to one’s self. The fringes (Hebrew: “tzitzit”; plural: “tsitsiyot”) are the tassels that God directed to be added to the hem of one’s garment; so designed as a reminder to keep his commandments (see Numbers 15:37-40; D’varim/Deuteronomy 22:12). The Greek word that Matthew uses for tzitsiyot is “kraspedon,” meaning “tassle” – pretty straightforward. The Greek word for tefillin here is far more loaded. Matthew uses “phylakteirion.” Most English translations don’t actually translate the word, but rather transliterate it instead by using “phylacteries.” Other translations use “prayer boxes” or “scripture boxes” to more clearly describe tefillin. But the problem with that is it may miss Yeshua’s point. The Greek phylakteirion means “amulet,” an object worn or used to provide protection from evil forces.

Yeshua may have been adding an extra layer of criticism to his tefillin reference by considering them and those using them as superstitious. Not only were they attempting to show off their piety, they were dabbling in the magic arts at the same time. The other possibility is that tefillin was already commonly regarded as an amulet and that Matthew used the best Greek word to represent tefillin as they knew it. This is discussed in the article: “The Origins of Tefillin.”

Either way, morphing God’s word into a magical object is what happens when we allow it (or should I say “force it”) to take on properties God never intended. One needn’t be a Bible scholar to see that the references used as a basis for tefillin are metaphorical. If the “sign on your hand” and a “memorial between your eyes” were meant to be taken literally, then we should also be stuffing our mouths with Bible verses in order to fulfill “that the law of the Lord may be in your mouth.”

The purpose of the metaphor “sign on your hand… and memorial between your eyes” was to encourage God’s people to always be ready to obey him and to keep his word in focus. The result would be that it would flow from our mouths. As God used his word to create the universe, so our mouths should be filled with his word in order to bring blessing into the world.

It’s a lot easier to create objects to attempt to manipulate the forces of life than to fill ourselves with God’s word as it was intended. I wonder how many amulets we utilize, thus deceiving ourselves into thinking we are godly when all we are doing is showing off or worse. We adopt all sorts of techniques and formulas thinking they’ll provide us with shortcuts to God and his power. Instead, let us embrace his word as he intended, allowing him to fill our lives to overflowing, always ready to hear and obey.