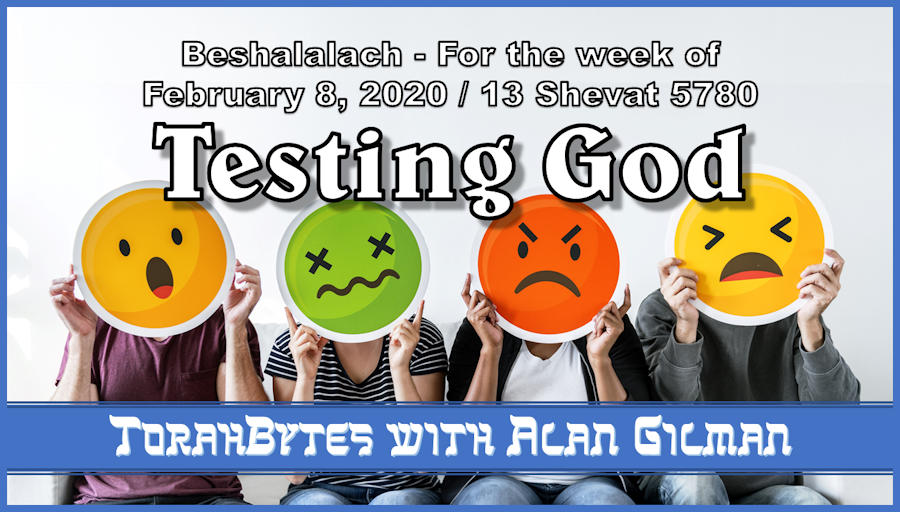 And he called the name of the place Massah and Meribah, because of the quarreling of the people of Israel, and because they tested the LORD by saying, “Is the LORD among us or not?” (Shemot/Exodus 17:7)

The Torah includes two similar, but very different, stories that feature the people complaining against Moses about their desperate circumstances, particularly due to the lack of water. The similarities between this version and the one found in chapter twenty of B’midbar/Numbers prompt some scholars to claim that they are the same event. I believe we are better off taking them at face value. Apart from the locations being clearly different in spite of the similarity of place names, there are considerable differences in the details. Before continuing, whenever discussing the people of Israel’s bad attitude in such circumstances, note that I am not pointing my finger at them as if I would have done any better. It’s when we see ourselves in the Bible’s characters that we are in a place to learn its lessons.

When we read the Bible, we might assume that we are being given a play-by-play of the incidences it reports. But stories, be they non-fiction or fiction are rarely, if at all, communicated that way. Even what we call “play-by-play” – a term often used for the describing of sporting events is selective. Announcers choose what to say based on their assessment of how best to communicate the main substance of what is occurring before them. If they are good at what they do, they create a meaningful and accurate, but not exhaustive, picture in the mind of their audience. In the reporting of any story there are more details omitted than provided. But that doesn’t undermine the truth of the story. In fact the more carefully chosen are its pieces and how intelligently crafted is the order in which they are presented, the greater the possibility of accurate representation and impact on the audience.

I explain all this because of the incident’s closing statement: “And he called the name of the place Massah and Meribah, because of the quarreling of the people of Israel, and because they tested God by saying, “Is the LORD among us or not?” (Shemot/Exodus 17:7). The name of the place was called in Hebrew “Masa u-M’rivah,” meaning “testing and quarrelling” for the obvious reason given in this statement. But notice how the testing of God is represented as: “Is the LORD among us or not?” This is in spite of the people not saying this. In fact, they don’t mention God at all. What we see them saying is first, demanding water from Moses, and then accusing him of bringing them out of Egypt to kill them and their children.

There is no direct mention of God by the people, but if we think this is simply a story of Moses having a hard day at work, we miss what’s really going on. On one hand I get the people’s perspective. It’s a lot easier to blame the leader you can see than the God behind it all that you can’t see. Yet, it didn’t matter how they couched their complaint; it was God who brought them there; so it was God they were testing.

I don’t think the Creator of the Universe has an issue with people being troubled over great hardship. Having no access to water is a most horrible situation. But they should have known better due to all the great wonders they had experienced up to this point.

And we should know better than to think that much of our grumbling isn’t also testing God. We cloud the issue when we focus on others. Is God sovereign over our lives or not? If God is God, then does he not retain the upper hand in whatever circumstances we find ourselves? To demand from people what only God can provide is to test the reality and love of God.

We often go to people for what we should be getting from God, because we have lost faith in him. God can handle our fears and doubts. Taking them out on others, not only does us and others no good, it will make things worse not better. But we can make things better by offering our desperate pleas to our Heavenly Father instead of taking out our frustration out on others.