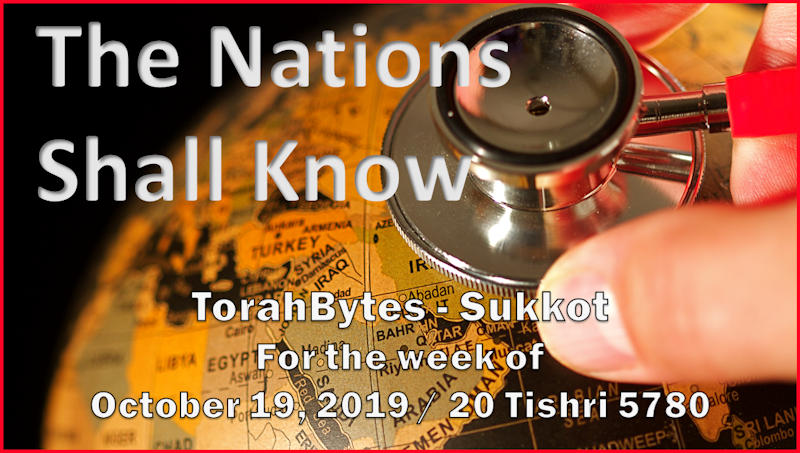 And my holy name I will make known in the midst of my people Israel, and I will not let my holy name be profaned anymore. And the nations shall know that I am the LORD, the Holy One in Israel. Behold, it is coming and it will be brought about, declares the Lord GOD. That is the day of which I have spoken. (Ezekiel 39:7-8)

The Haftarah for this special Shabbat coinciding with the sixth day of Sukkot (the Festival of Booths) is a favorite for those focused on the Bible’s predictive portions. Many of these have already been fulfilled. These include those that are concerned with the Messiah’s initial coming (see http://alangilman.ca/messianicprophecies/) and other past events such as the emergence of ancient empires (see Daniel 7) and the second destruction of the Jerusalem Temple (see Daniel 9:20-17; Matthew 24). Much of what we are still anticipating is derived from passages that appear to refer to cataclysmic events associated with the Messiah’s return and the final judgement.

Early on in my new-found faith in Yeshua, I encountered people who were nearly obsessed with the details of predictive passages. I found it curious at that time and continue to wonder about how people could be so convinced of details of future events when they are not fully spelled out in Scripture. I accept that they think they are, but I am personally not convinced. What’s worse is, in my opinion, the creation of ideological camps based on various end-of-the-world schemes.

Another concern about this is how certainty over the details of possible upcoming events can result in the unnecessary unsettling of people’s faith. When teachers are so adamant that the Bible’s trustworthiness hinges on their particular understanding of certain passages, then when their predictions don’t happen as promised, it’s easy for those following them to throw out the actual Word of God along with misguided interpretations.

I prefer to try as best I can to stick to what we can determine with certainty from the biblical text. Take this week’s Haftarah for example. On one hand I appreciate the desire to try to determine the identities of Gog and Magog. Asking who they might be is a reasonable question. But as far as I can tell, no one knows for sure. That takes nothing away from the main thrust of the passage, however.

What’s clear is that God is in complete control of the situation regarding the people of Israel in the land of Israel. As I write this, we are looking at a situation with the nations of Turkey, Syria, and Iran that is potentially catastrophic for the region including Israel. Might this be the setting up of the scene in this section of the prophet Ezekiel? Perhaps. We’ll have to wait and see. Thankfully, the purpose of predictive passages isn’t the identification of all the details, but rather to heed the message.

God’s message through Ezekiel here is that he will use the coming events against Israel to make himself known to both Israel and the rest of the world. His commitment to his Word stemming back to Abraham, Isaac, and Jacob remains certain regardless of appearances. The reality of the God of Israel and the truth of his Word will be established in the world and there will be no denying it. In spite of whoever may seem to have the upper hand in the latest plot or plan, it’s God’s purposes that will eventually come to pass.

I wonder if we think that the more we have a handle on the details of coming events, the more secure our lives might be. It can be comforting to wax eloquent over supposedly fascinating insights of which others are so clued out. But such a handle is illusionary. If we were honest, we would admit that such certainty is based on nothing other than guesses. Making up truth blurs reality and prevents us from facing the unknowns of not only the Bible but of life in general. This kind of dogmatic guessing is not the exclusive domain of Bible readers but is common to human beings in all sorts of realms of supposed knowledge.

If we would receive Ezekiel’s message, we would learn to accept the unknowns of both Bible and life and learn to find security in the One who will work out all things according to his will.