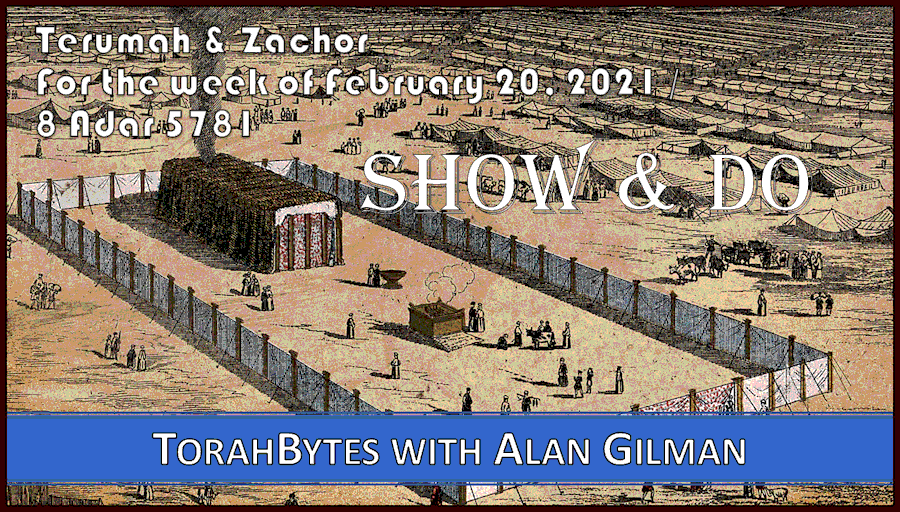 Illustration: The tabernacle erected in the wilderness, surrounded by an enclosure and miles of tents. Colored etching after W. Dickes. Courtesy of Wellcome Images, a website operated by Wellcome Trust, a global charitable foundation based in the United Kingdom.

Exactly as I show you concerning the pattern of the tabernacle, and of all its furniture, so you shall make it. (Shemot/Exodus 25:9)

There are two major sections in the second book of the Torah that are concerned about the building of the mishkan, usually translated into English as “tabernacle.” It was a large, yet mobile, complex designed as the locale for the offering of sacrifices and other priestly functions on behalf of the nation of Israel. Mishkan means, “dwelling place,” as it was to represent God’s dwelling among his people. This week’s parsha (English: Torah reading portion) through chapter thirty contains the instructions of the mishkan, its furnishings, and other related items, including the priests’ clothing and recipes for the special oil and incense. Then the actual construction is described beginning in chapter thirty-five through the end of the book, chapter forty.

Various people have attempted to draw or build accurate images or models – including life-sized versions – of the mishkan, but there is no way to ensure accuracy due to a missing ingredient in the instructions recorded by Moses. It appears that he was privy to something besides the details we read in the Torah. Not only did God tell him what to do, he also showed it to him. Because Moses saw what to do, he could also instruct the people on how to do it.

Before I continue, a word about the so-called Oral Torah. Jewish tradition claims that when God gave Moses his word to write down, he also told him other things that he did not write down, but instead was to be passed on orally. One of the main purposes of the Oral Torah is to interpret the written Torah. The Mishnah, which is the core of the Talmud is the written version of the Oral Torah. A scriptural basis for the Mishnah is the verse we are looking at, since it suggests that Moses was made aware of certain aspects of God’s revelation to Israel that he didn’t write down. However, this is no way legitimizes an oral tradition that most certainly was developed over time. Just because Moses was equipped with more than the written instructions for the Mishkan here doesn’t prove anything about other later rabbinic teachings.

What, then, might we learn from Moses’ experience of the mishkan? The people of Israel needed more than just “the what” of building it. They also needed “the how.” Throughout the ages people have abused the Bible because they thought that a simple reading was sufficient to live out its teachings. Armed with only the what, well-meaning, but otherwise naïve people have caused more damage than good. They claim to be taking God at his word but possess neither the sensitivity necessary to understand it nor his wisdom to live it out effectively.

When we read the Bible, we are not on our own. It’s a very old book, but its ultimate author is still alive. Not only that, he has made himself available to anyone who seeks him. In order to truly understand his word, we need to rely on him to show us how. This is not to say that our intuition or spiritual senses are reliable guides in themselves to understand the difficult and not-so difficult parts of scripture. The scriptures themselves provide interpretive boundaries for us. If Moses, having recorded the mishkan instructions, claimed that God showed that they were to build a boat, then everyone would know something was not right. I know that’s an extreme example, but it makes the point clear. If an interpretation of scripture is not well-supported by scripture, we should not trust it.

The same goes for any attempt to follow God’s instructions. Through the Ruach HaKodesh (English: the Holy Spirit) God speaks to his people in various ways. But too often we fail to wait upon him for how to do what he is calling us to do. Instead, we need to wait on him to show us, and then do.

One thought on “Show and Do”