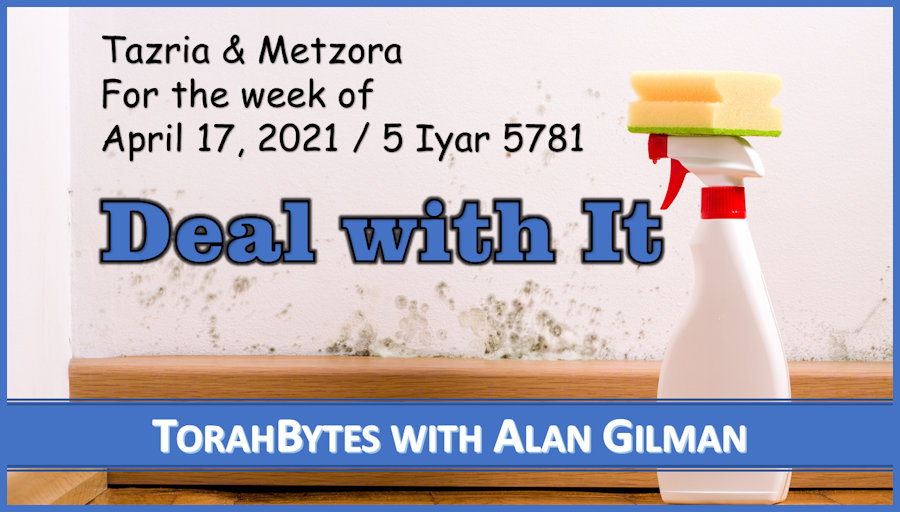 Then he shall examine the disease on the seventh day. If the disease has spread in the garment, in the warp or the woof, or in the skin, whatever be the use of the skin, the disease is a persistent leprous disease; it is unclean. And he shall burn the garment, or the warp or the woof, the wool or the linen, or any article made of skin that is diseased, for it is a persistent leprous disease. It shall be burned in the fire. (Vayikra/Leviticus 13:51-52)

As I have studied Torah for most of my life, I have come to see that there is far more to its teachings than the particular details it describes. Don’t get me wrong! The details are extremely important, but the details point beyond themselves to something much greater. I don’t mean that in some esoteric way as if the Bible is a code book of mysteries to be solved (in spite of what some may think!). It’s more straightforward than that. As we absorb its content over time, we are drawn into God’s understanding of the world in which we live. This worldview is not simply one possible way to look at life, but the only truly effective way. The God of Israel – the one who both designed and implemented the creation – is the only one who truly understands how best to negotiate the complexities of living. Through the Scriptures he has revealed that understanding.

Take for example the section of Torah we are in currently. God through Moses establishes strict guidelines with regard to certain infections. Note what’s missing. There is a great lack of spiritualization here. There’s nothing to suggest that people whose bodies or houses were afflicted were to blame in any way. While there was what to do in response, there was no reason to be ashamed of such things. Lack of shame encourages people to not hide their problems but bring them out into the open where they can be dealt with.

Not everything that looks problematic is serious. It was necessary for the general population and the leadership to learn the difference between those things that needed to be cut out and destroyed and others that could be left alone. A culture trained by God in this way would learn to approach all of life in a similar fashion. One doesn’t have to be a psychologist to know that negative human behavior can be as infectious as the examples given us in Torah.

In the New Covenant Writings, Paul provides an illustration of this (see 1 Corinthians 5:6-8). The faith community of the city of Corinth had allowed arrogance and malice to fester. He likened these negative influences to the way leaven pervades dough. Once the fermentation process gets in, it can’t be removed. It affects the entire batch. He therefore calls for a whole new lump of dough.

The problem with Paul’s illustration is when it comes to fermented dough, it’s permanent. If this was really about dough, then “Cleanse out the old leaven that you may be a new lump, as you really are unleavened” (1 Corinthians 5:7), would require throwing out the infected batch and starting with a new one. There’s no way he intends an exact parallel for the Corinthians. He isn’t saying that their community was beyond the point of no return; that they would need to start with a whole new group of people. What he is saying is that the transformative process required to resolve their metaphorical infection was drastic and would, therefore, require a resolve on the part of this community to take their situation seriously. They would have to do whatever was necessary to experience renewal. Thankfully, Paul’s extreme language emphasizes the potential of God’s transformative power available to them (and to us!) through Yeshua the Messiah.

Unless we are willing to identify and deal with potentially destructive issues, they will pervade our lives and spread to our loved ones and communities. God, through Yeshua, offers us complete cleansing. But we need to have the courage to take these things seriously and the wisdom to fully deal with them. While some issues are no big deal, some are. Let’s deal with them before it’s too late.

One thought on “Deal with It”