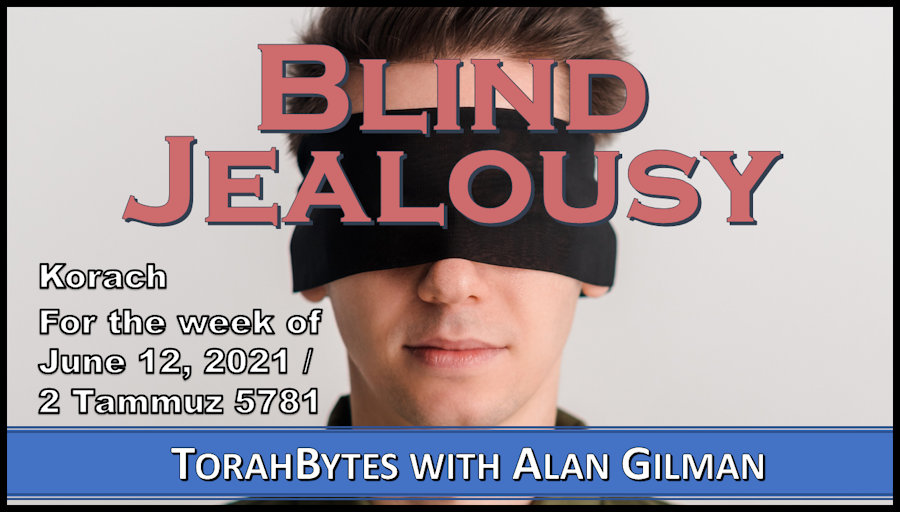 Jealousy is blinding. I don’t mean the appropriate kind of jealousy that refuses to allow others to get in the way of your marriage, for example. That’s the jealousy God has for his people. I am talking about the all-consuming emotion that takes us over when someone else has what we think we should have.

That’s what was controlling Korah and company. They couldn’t handle seeing Moses and his brother Aaron being in leadership. And it’s not as if they were at the bottom of the ladder themselves. They were Levites, the tribe of Israel that was set aside to serve in the Mishkan (English: Tabernacle). Being special was not special enough, however, as they set their eyes on the priesthood itself.

I don’t know if they thought they would have more perks or prestige by being priests. We aren’t told. But it doesn’t matter. That’s just how jealousy works. The thought they were missing out was enough to drive them. They had to have what was not allotted to them or least what they thought they were missing out on. Jealousy can’t see the true nature of whatever it is jealous of. It’s always the perceived privilege or status that is passionately desired. It’s so easy to look at the exterior of other people’s lives and think they have it better than we do. Status and prestige are not all they appear to be. With privilege, if privilege comes into play at all, comes responsibility.

When jealousy fills us, we can’t see that roles and responsibilities are allotted to people from God. That may sound overly spiritual and idealistic, especially in a world where injustice abounds. This is not the case in Korah’s story. Based on divine inspiration we know Korah is not ultimately challenging Moses and Aaron but God. But what about it when it is you and me? How do we know when our place and position are due to God’s direct involvement or the machinations of other forces?

It depends how much in control you think God is. On second thought, it doesn’t matter what you (or I) think, what’s the truth? Is God only involved with some people sometimes, or with everyone all the time? While not speaking directly to the issue of allotted roles, these words from the New Covenant book of Hebrews are applicable:

Keep your life free from love of money, and be content with what you have, for he has said, “I will never leave you nor forsake you.” So we can confidently say, “The Lord is my helper; I will not fear; what can man do to me?” (Hebrews 13:5-6)

The writer encourages his readers (and us by extension) to be materially content on the basis of the intimate presence of God. This is not a pseudo-spiritual directive to disconnect emotionally from reality. This reminds us the Messiah follower can be confident that God is personally involved in his life. We are assured therefore that whatever is happening to us is not outside of God’s direct control.

That doesn’t mean we should never pursue change. Far from it! As emissaries of the Kingdom of Heaven there are no greater change agents in the world. But when things don’t go the way we expect; when we feel passed by while others are placed in positions we think we deserve, we must avoid jealously at all costs. Instead we should continue to commit our lives to God, looking to him to work things out according to his will.