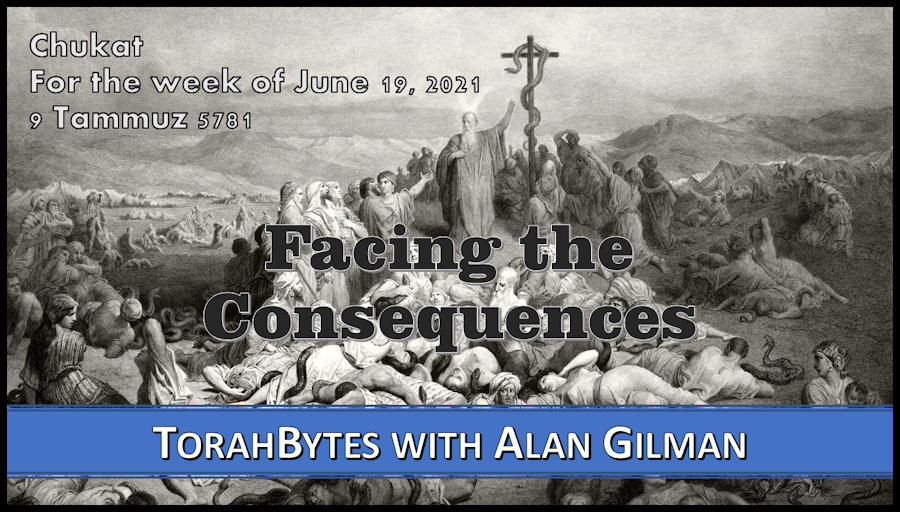 The Brazen Serpent by Gustave Dore

I have always wondered about this story. It begins with the people of Israel yet again venting their frustration with their ongoing challenging situation. We read, “From Mount Hor they set out by the way to the Red Sea, to go around the land of Edom. And the people became impatient on the way. And the people spoke against God and against Moses, “Why have you brought us up out of Egypt to die in the wilderness? For there is no food and no water, and we loathe this worthless food” (B’midbar/Numbers 21:4-5). As I have said before, I don’t criticize them for their mishandling such situations. Nothing I have ever gone through comes close to Israel’s years in the wilderness. They shouldn’t have taken out their frustration on God and Moses, but I personally can’t fault them for doing so. I have to be careful, however, not to let my empathy for the people’s suffering get in the way of whatever lesson I need to learn from this affair.

The result of their faithless behavior was God’s sending among them “fiery serpents,” most likely very painful poisonous snakes. It didn’t take too long for the people to admit to their erroneous ways and plead with Moses to pray on their behalf for relief. God’s solution was unique in Israel’s history. He directed Moses to construct a bronze serpent on a pole. If anyone who was bitten looked at the bronze serpent, they would be healed.

That such an item would be sanctioned by God for such a purpose is very strange given the strong prohibition against idols. In fact, this item eventually did become an idol (for more on that, see the TorahBytes message, When Blessings Become Idols. As for its God-sanctioned purpose in the moment, it became a tool of faith. Certainly, the power of the healing came from God. It was the submitting to his directions in the situation that made the difference here.

But did the object itself contribute at all to the experience of healing? It might sound spiritual to say that God could have told Moses to make anything or even nothing. That might be true, but I wouldn’t assume that God’s instructions were arbitrary. It certainly doesn’t seem they are. People are bit by snakes; they have to look at a snake. Coincidence? I think not!

Since the text doesn’t clearly state the reason for the bronze serpent on a pole, we need to tread carefully. What is clear is the association between the instrument of punishment and the instrument of healing. Yet, it’s that connection which I have always found strange. How could it be that the object which was the source of pain could end up being the source of healing?

I think I’ve got it! Calling the Israelites to gaze upon the source of their pain forced them to acknowledge the consequences of their actions, and the result was healing. Not to take away anything from the supernatural dynamic of this, but isn’t this the way life works? How much personal suffering do we prolong because we refuse to accept the negative consequences of our wrongs? Conversely, how many of us have experienced the freedom that is derived from facing those consequences. While God is the agent of healing, true repentance requires we accept responsibility for our behavior.

As you may be aware, Yeshua used this story in his conversation with the Jewish leader Nicodemus to point to himself, when he said: “And as Moses lifted up the serpent in the wilderness, so must the Son of Man be lifted up, that whoever believes in him may have eternal life” (John 3:14-15). To gaze upon the crucified Messiah is to see the consequences of our sins. It is when we realize that our attitudes and behavior resulted in the horrific suffering of the Son of God, that we can be healed from the consequences of our actions.