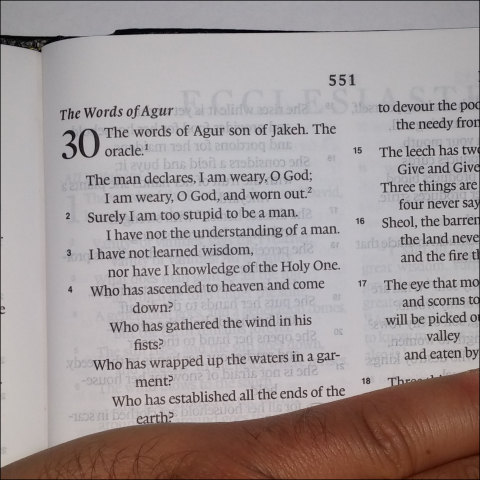 Then God said, “Let us make man in our image, after our likeness.” (Bereshit/Genesis 1:26)

I didn’t know what was in store for me that day. I was sitting in the living room of a friend’s house, attempting some small talk with a new acquaintance. I was trying to recover from being told by this fellow Jewish young person that he “preached the word of the Lord.” I don’t know if I had said anything in response before he continued to describe the basics of his beliefs: the Bible was the Word of God; God had a son; and Yeshua was the Messiah (though he used the common English appellation, “Jesus”) – three things I certainly didn’t believe. To my surprise he made compelling arguments for all three of his assertions, one of which I want to focus on this week.

I was no theological expert, but I knew, being Jewish, that God could not have a son. So it was quite a surprise to me to see the twenty-sixth verse of the first book of Moses quoted above. “Let us make man in our image”? What’s with the plural? Who is “us”? Is it the angels? Not likely, since according to Scripture only human beings are made in God’s image. It’s certainly not the animals. Could it be a majestic plural in the way royalty might say, “We are not amused!” Possibly, but that isn’t normal word usage for God in the Bible. It does occur in three other places. Two chapters later, after our first parents’ disobedience: “Then the LORD God said, ‘Behold, the man has become like one of us in knowing good and evil.’” (Bereshit/Genesis 3:22). This could be a reference to other heavenly beings, if creatures such as angels know good and evil in the way spoken of here. Later, in response to the attempted building of the city and tower of Babel, it is clearly possible that God is calling for his angelic servants to join him in upsetting the people’s misguided plans: “Come, let us go down and there confuse their language, so that they may not understand one another’s speech” (Bereshit/Genesis 11:7). The same sort of heavenly company might be in view when God calls out an open invitation in the hearing of the prophet Isaiah: “And I heard the voice of the Lord saying, “Whom shall I send, and who will go for us?” (Isaiah 6:8). But the possible explanations for the use of the plural in these other examples don’t seem to apply to the first one.

Of course, the use of “let us” by itself doesn’t prove much, let alone that God has a son. But I learned that day that this isn’t the only verse in the Hebrew Bible that implies that there is more to God than what I was led to believe growing up. In the second Psalm, we read “I will tell of the decree: The LORD said to me, ‘You are my Son; today I have begotten you” (Tehillim/Psalm 2:7). While this may be a song about David, Solomon, or another ancient King of Israel, the grand language more likely is referring to the Messiah. In either case, “Son” here could be a way of referring to Messiah’s special role under God, but note that the Scripture isn’t avoiding sonship language in the way I and many in my Jewish community were inoculated against. This is similar to God’s word to David in a passage that likely applies to both his own son Solomon and to King Messiah much later on: “I will be to him a father, and he shall be to me a son” (2 Samuel 7:14). Is this simply speaking of role or something much more intimate?

Who has ascended to heaven and come down?
Who has gathered the wind in his fists?
Who has wrapped up the waters in a garment?
Who has established all the ends of the earth?

I was then asked, “Who?” To which I replied, “God.” Easy answer. Then the rest of the verse was uncovered:

What is his name, and what is his son’s name?
Surely you know!

I didn’t know, but I was soon to find out!

One thought on “Can God Have a Son?”