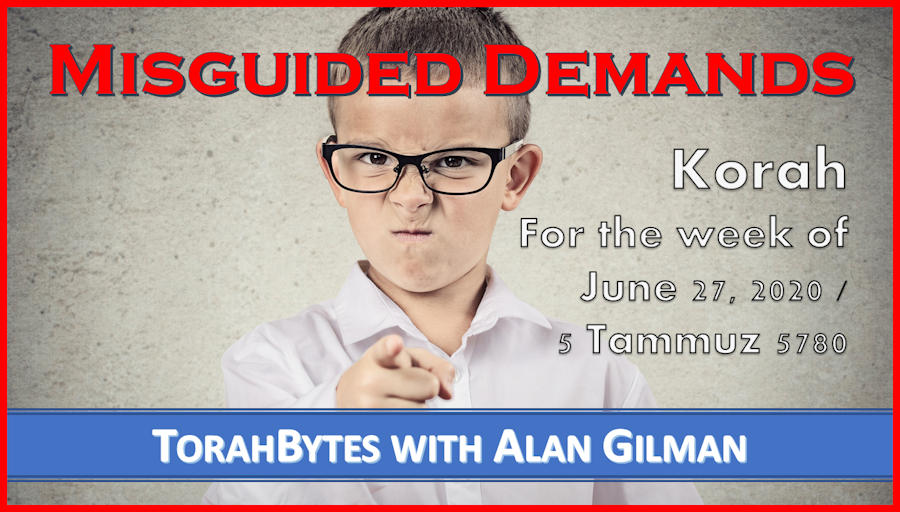 And all the people said to Samuel, “Pray for your servants to the LORD your God, that we may not die, for we have added to all our sins this evil, to ask for ourselves a king.” And Samuel said to the people, “Do not be afraid; you have done all this evil. Yet do not turn aside from following the LORD, but serve the LORD with all your heart. And do not turn aside after empty things that cannot profit or deliver, for they are empty. For the LORD will not forsake his people, for his great name’s sake, because it has pleased the LORD to make you a people for himself. (1 Samuel 12:19-22)

This selection from the Prophets section of the Hebrew Scriptures is read each year along with this week’s Torah reading in which certain Israelites rebel against God’s choice of Moses’ brother Aaron and his descendants as priests. God’s harsh judgment upon them and their families may be the reason for the people’s fear in this incident centuries later.

The reason for their fear was that they had just come to grips with their own rebellion against God in their demanding a king (see 1 Samuel 8:4-9). They may have thought that they would be subjected to the same plight as the people judged in Moses’ day. But that was not to be. Instead, despite their misguided demand, the prophet encouraged the people to stay true to God from that moment on as he assured them of God’s ongoing faithfulness to them.

Why did the people in the earlier instance die for their sin, but not in this case? The emergence of the monarchy in ancient Israel is ambiguous. Was God in favor of establishing a kingdom or not? The Torah anticipates an eventual king (see D’varim/Deuteronomy 17:14-20). Yet when Israel desires one, God deems this as rebellious.

It doesn’t seem that it was the concept of having a king that was the issue. Centuries earlier, as recorded in the book of Shoftim (English: Judges), following the conquest of the Land of Israel led by Joshua, Moses’ successor, the people were faithful to God for a couple of generations, but then began to turn to idols. The result of their unfaithfulness was foreign oppression. Eventually out of desperation the people would call out to God, who would send a shofet (English: judge), a divinely inspired military leader who would deliver the people. Everything would be fine until the shofet died and the cycle of rebellion, oppression, and deliverance would reoccur. The prophet Samuel was also a shofet as well as a cohen (English: priest). He arose in the days of a very corrupt priesthood, when the Chief Priest, Eli, didn’t restrain his priestly sons from immorality and abuse of the sacrificial system, something that he himself may have benefitted from. The rise of Samuel was a bright light in an otherwise dark time. But his sons too didn’t walk in God’s ways.

Understandably the people had enough of systemic corruption. They thought if they could instigate an overhaul of the system, all would be well. They no longer wanted to wait on God to provide his appointed leader in his time. Instead they wanted the kind of leader that other nations had. Someone they were confident would lead them well and provide a type of governmental stability that they had never known.

Saul, the first king of Israel, was the king like the other nations they wanted, and yet he too was a disaster. Saul’s demise became God’s opportunity, so to speak, to establish the monarchy his way through David, “a man after his own heart” (1 Samuel 13:14).

God, therefore, leveraged the people’s demands to establish the kingdom in his time and in his way. This is not the first time he utilizes evil for good. That God uses our sin to accomplish his purposes doesn’t excuse the wrong. But it might be why he isn’t as harsh with some forms of human rebellion as others. The rebellion in Moses’ day was a direct assault on God’s plans and purposes and had to be eradicated. The people’s focus on human agency to provide stability and resolve corruption in the later incident is an opportunity for God to accomplish a greater good.

Regardless, the lesson is the same. Taking matters into our own hands and insisting that the powers that be perform according to our demands will always get ourselves and others in trouble. This is not to say that our concerns are invalid nor that we must always accept the status quo. Sometimes our concerns are completely selfish and destructive as they were in Moses’ day. On the other hand, the people in Samuel’s day were right to grieve over the state of their society. God agreed with their concern and was planning to do something about it. However, so much grief could have been avoided if they would have sought to resolve their situation in God’s way in God’s time.