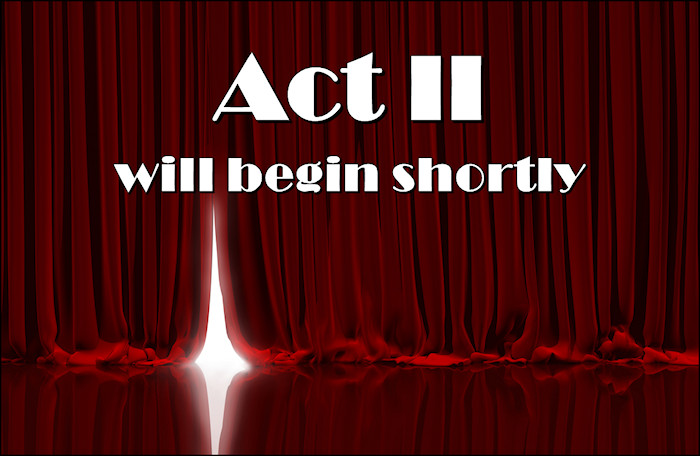 Comfort, comfort my people, says your God. Speak tenderly to Jerusalem, and cry to her that her warfare is ended, that her iniquity is pardoned, that she has received from the LORD’s hand double for all her sins. (Isaiah 40:1-2)

One cannot overstate the drama of Isaiah’s comfort call. The contrast of these words with what comes before is so great that scholars tend to assume that they are authored by a different speaker/writer. The contrast of tone isn’t the only reason for the common scholarly determination of more than one “Isaiah,” but I don’t find such a conclusion compelling. What we really have is the start of a sequel or a new act.

Act One had ended with the stage gone dark. All hope is lost, because Israel had spiraled down to the apparent point of no return. The narrative closed with a most cynical tale of King Hezekiah, one of the greatest of all Jewish kings, receiving God’s message from Isaiah that even though he successfully overcame the Assyrian siege and was miraculously cured of a lethal illness, Babylon, the empire to succeed Assyria, will vanquish his dynasty and take the people into exile. If that’s not bad enough, the hitherto noble king, comforts himself with the news that this won’t happen until he is long dead.

Act Two begins with a brilliant explosion of good news: “Comfort, comfort my people,” says Israel’s God – judgement has run its course, warfare has ended; sin is forgiven. The Hebrew word for “comfort” is “nacham” and has two meanings, depending on how it is used. Either way it denotes change. It could mean “to relent,” a change of intention – one plan of action replacing another. The meaning in this context, however, is “to comfort” or “to be comforted” – an emotional change, where one feels a certain way, usually bad, and is consoled, shifting their outlook on life.

Against the backdrop of despair and cynicism, is the promise of comfort. The diagnosis was devastating, the sickness far worse than imagined. Under normal circumstances, such a road leads to nothing but complete destruction. But not in this case – not as far as God’s people are concerned. The God of unconditional covenant love always has a positive future in mind for his precious people in spite of relatively short-term hardship.

Israel’s desperate plight at the end of Act One typifies our own day in many ways. In spite of previously unknown levels of affluence and the exceptional quality of life experienced by so many, societal and personal darkness pervades. From old and new terminal illnesses to political instability to grand-scale people displacement, to increasing violence, and the threat of nuclear annihilation, one little spark can set the entire world ablaze. We are becoming unglued as a cloud of meaninglessness and hopelessness saturates the global psyche. What’s the point of being human anyway?

God’s word to Israel was that the day was coming when their suffering would cease, creation would be renewed, and peace would reign forever. The Jewish people’s incessant angst and anguish would finally and forever be transformed, when chaos turns to order, destruction to rebuilding, sickness to health, death to life. Therefore, be comforted. The darkness will not last forever. Light will not only return but will never fade again.

These words of comfort are not for Israel alone. For God’s heart for the Jewish people as expressed at this stage in their history is a reflection of his desire for all peoples. Every human being has a story like Israel, albeit with a different cast of characters and unique sub-plots. Yet, whatever our heritage, the human story is the same: tragically dark and often hopeless, especially if we are honest. Yet, like Israel, your story needn’t end there. With God, there’s a second Act for you too.

You may have thought that your story ends with Act One. You may think there’s nothing beyond the darkness of your life. Or, like Hezekiah, you comfort yourself with short-term vision, making the best of your situation. “It could be worse,” you say. Yet you know if you would look beyond yourself, you couldn’t handle the state of the world.

But the story isn’t over. God will come through. He has proven that through the resurrection of the Messiah. You may already believe that even though you have a hard time being comforted. It might be that you are still stuck at the end of Act One, thinking, in spite of your claim to faith, darkness has the final word after all.

Excuse me while I flick off and on the lights. Intermission is over! There’s more to your story, because there is more to God’s story. Not only does he win in the end, he invites you to be part of it. Perhaps that’s your problem. All the while you have been sitting in the audience when you are cast as a star in the show. You don’t only get to be part of the grand conclusion, you have an essential role to play.

I understand why you are sitting there. Life has been so painful and so confusing. You have tried to comfort yourself to no avail. But that’s the problem. Right now, God wants to heal and restore you. And he will if you cooperate with him. You will be comforted, once you allow him to comfort you on his terms.

Further discussion is available on this edition of TorahBytes Live:

One thought on “Your Story in Two Acts”