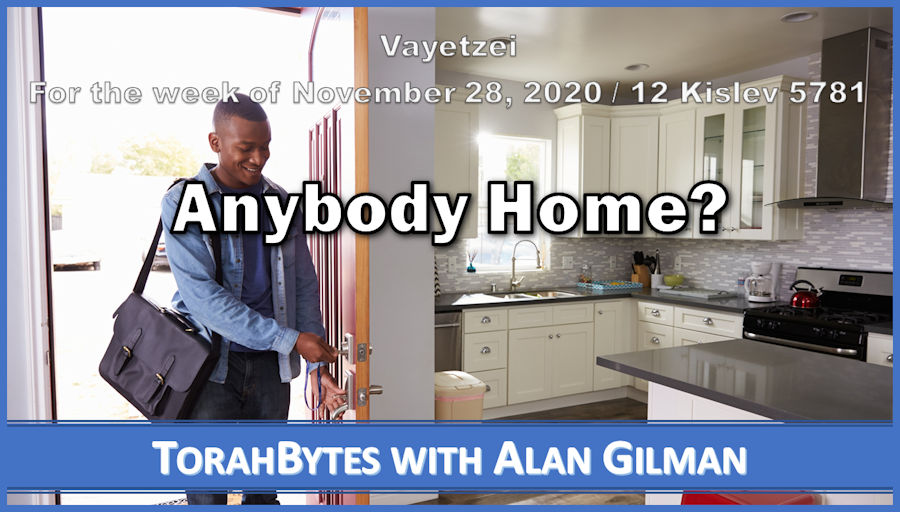 Then Jacob awoke from his sleep and said, “Surely the LORD is in this place, and I did not know it.” (Bereshit/Genesis 28:16)

Have you ever entered your house and called, “Is anybody home?” If no one answered, what did you do next? Did you immediately conclude that you were alone, or did you call out again in the same manner? If you called again and still no answer, what then? What did it take before you were satisfied that no one else was there? I imagine most of us would call out a couple of times and that would be enough. But have you really thought this through? Maybe someone is home, but they have their earbuds in and cannot hear. Maybe they are in the shower. Or they are sleeping. They may even be hiding.

Of course, depending on the situation and the people involved, we are most often capable of accurately sizing up situations like these. On the other hand, I suspect that some of you have funny, embarrassing, or frightening stories of when you thought you were alone but were not. This goes to show that it is very difficult, if not impossible, to prove the non-existence of something. Even if you scoured your entire house, you could never be completely certain that there was no one else there. All you can do is make a tentative conclusion based on reasonable evidence.

In Jacob’s case, he had been in the presence of God and wasn’t aware of it. Only upon awakening from his inspired dream did he realize that God had been there. You might think that since his experience was within a dream, it didn’t indicate anything about God’s actual presence in that place. Didn’t Jacob know the difference between a dream and reality? Perhaps Jacob overstated the significance of the dream. Yet, his statement reflects his general lack of God-awareness.

Until this point, we have no record of prior interaction between Jacob and God. In fact, the only mention of God from Jacob’s lips before this, was when he took the Lord’s name in vain while attempting (and succeeding) to steal his brother’s blessing (see Bereshit/Genesis 27:20). So, whether or not Jacob was correct in his understanding of how God’s presence manifested in the place he named “Beit-el,” he had been generally unaware of God altogether. Despite this experience, it would be many years before he would fully reckon with God’s reality in the world. Until his dramatic and painful encounter with God upon his return to the Promised Land (see Bereshit/Genesis 32:22-32), Jacob would continue to live his life as if God didn’t exist.

Many people have dismissed God’s reality because they concluded the evidence speaks against his existence. It doesn’t seem like anyone’s home, so we must be alone. I understand that God’s invisibility lends itself to such a conclusion. But if there are personal invisible forces at work in the universe, then we wouldn’t be able to see them. Evidence for their existence would need to be of a non-material sort. The problem is we process information via our physical senses. Thankfully, God is aware of that. After all, he made us this way. And that’s why he has made himself known through means which we can perceive.

Dreams are not the only way that God makes himself known. He is reflected in the grandeur, variety, and precision of nature; he demonstrates his power through unusual events; he reaches out to us through human kindness and love; and he is most clear through his written Word, especially with regard to the coming of the Messiah. For those who are openhearted and are willing to seek him out, the evidence for God’s existence is readily available. There really is someone home. God is not hiding. It is we who are too quick to conclude otherwise.

This is not simply a message for the unbeliever, the atheist, the God denier. We may confidently claim to believe in the existence of God, yet still live our lives as if no one is home. Just because he doesn’t impress himself upon us in the ways we might prefer, he expects us to be far more aware of his presence than we are normally. God is with us as he was with Jacob. We shouldn’t have to wait until things get drastic before we take him seriously. On the contrary, the times we are in currently are far more drastic than we know. It’s time we accepted that the Lord is in this place and act accordingly.

One thought on “Anybody Home?”