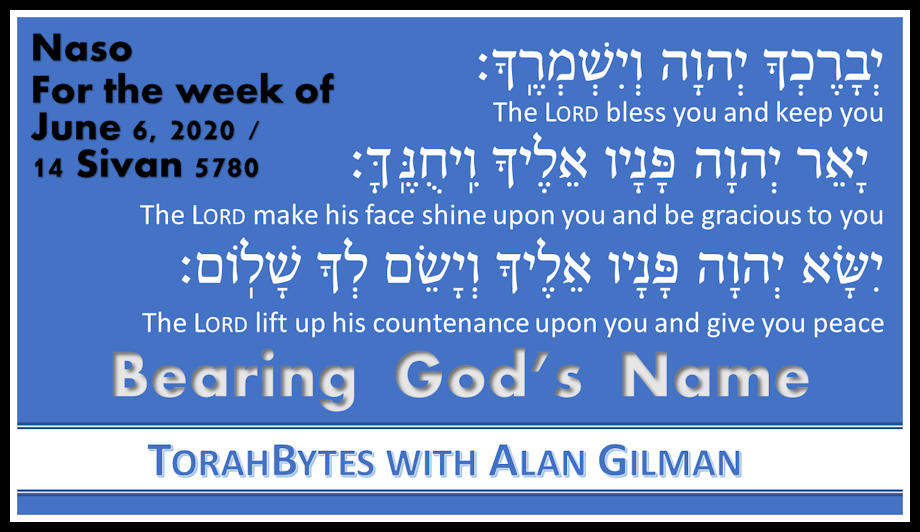 The LORD spoke to Moses, saying, “Speak to Aaron and his sons, saying, ‘Thus you shall bless the people of Israel: you shall say to them, “The LORD bless you and keep you; the LORD make his face to shine upon you and be gracious to you; the LORD lift up his countenance upon you and give you peace.”’ So shall they put my name upon the people of Israel, and I will bless them.” (B’midbar/Numbers 6:22-27)

I recently posted my reflections on the global song phenomenon, “The Blessing” (http://alangilman.ca/2020/05/20/the-blessing/). What struck me was hearing (and seeing) people of every tribe, nation, and language singing back to me the ancient words God gave our priests to speak over us, the people of Israel. What was first intended exclusively for my people has been extended to the entire world.

The likely reason for the song’s popularity is its extreme positive message amidst the uncertainty of the current pandemic. And as I write this, we are seeing an eruption of violence and fear stemming from anger over injustice and racism. People long to be assured that they and their loved ones can find security in a troubled and dangerous world. The song’s repetition of “He is for you” is in contrast with the pervasive and growing threat of danger all around us.

In my earlier reflections, I pointed out how unique such a positive expression would have been in the ancient world, where by and large the gods could not be trusted. Much of pagan ritual calls for the appeasement of the gods in the hope to avert disaster. That the Master of the Universe cared for and wanted to bless human beings was a novel idea. But there is more to this blessing than good thoughts and warm wishes. The priestly blessing was not a heavenly greeting card designed to warm our hearts. In fact, the purpose of the blessing is clearly stated as: “So shall they put my name upon the people of Israel, and I will bless them” (B’midbar/Numbers 6:27).

Blessing is obviously the prime objective. The details express God’s desire that his people experience security, peace, and goodness and all that these entail, including health, safety, and prosperity. However, there is a dynamic here that is easily missed. It’s what the priests are actually doing by pronouncing this blessing over the people: they were putting God’s name upon them.

One of the reasons why this is easily missed is that in most translations God’s name is not evident. We read or hear “the Lord bless you and keep you; the Lord make his face to shine upon you. “The Lord” is not a name, but a title. But as many of you probably know many of the occurrences of “the Lord” represent what is actually God’s name – a name spelled with the Hebrew letters yod, hey, vav, hey, which mean something like “The Being,” as it is derived from the verb “hayah,” meaning “to be.” By the time of Yeshua, two thousand years ago, the Jewish people had already deemed pronouncing God’s name as too sacred, thus substituting it with either Ha-shem, “the Name,” or Adonai, “Lord.” As time went by the pronunciation of God’s name was forgotten.

There are many people who get really passionate about this. Since God has a name, they say, we should use it despite our not know exactly how to say it. But with all due respect I believe that misses the point. While I agree that using a name instead of a title like “Lord” would more quickly clue us in that God’s name is an intricate part of the blessing, that wouldn’t necessarily accomplish its intent. What it would do is lesson the possibility of turning this into a generic blessing from a nondescript God. That issue is easily resolved by my pointing this out, as I have just done, without engaging the controversy over the pronouncing of God’s name.

The purpose of the blessing was that the Israelite priests were to put God’s name on the people. Blessing from God would be the outgrowth of their connection to him. The word for “put” in Hebrew simply means “put,” as when a cloak is put on someone’s shoulders. The blessing was to call the people of Israel to be bearers of God’s name. God’s name is primarily his character and his reputation. To bear the name of the God of Israel is to be clearly demarked as his particular people to accomplish his plans and purposes. Blessing in all its abundance from this God was assured as they welcomed and participated in their intimate association with him.

It does people no good to speak about God in nondescript ways. To seek to bless without reference to who is actually the source of the blessing is no different than wishing upon a star. In these days of crisis people need to connect with genuine hope in an otherwise hopeless world. Let’s unapologetically call people to bear the name of the God of Israel before it’s too late.